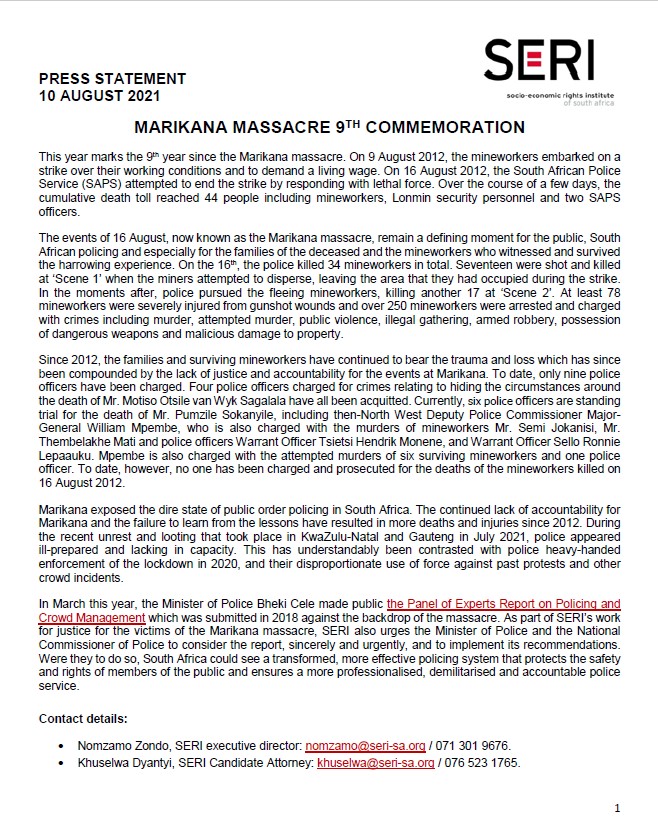 This year marks the 9th year since the Marikana massacre. On 9 August 2012, the mineworkers embarked on a strike over their working conditions and to demand a living wage. On 16 August 2012, the South African Police Service (SAPS) attempted to end the strike by responding with lethal force. Over the course of a few days, the cumulative death toll reached 44 people including mineworkers, Lonmin security personnel and two SAPS officers.

The events of 16 August, now known as the Marikana massacre, remain a defining moment for the public, South African policing and especially for the families of the deceased and the mineworkers who witnessed and survived the harrowing experience. On the 16th, the police killed 34 mineworkers in total. Seventeen were shot and killed at ‘Scene 1’ when the miners attempted to disperse, leaving the area that they had occupied during the strike. In the moments after, police pursued the fleeing mineworkers, killing another 17 at ‘Scene 2’. At least 78 mineworkers were severely injured from gunshot wounds and over 250 mineworkers were arrested and charged with crimes including murder, attempted murder, public violence, illegal gathering, armed robbery, possession of dangerous weapons and malicious damage to property.

Since 2012, the families and surviving mineworkers have continued to bear the trauma and loss which has since been compounded by the lack of justice and accountability for the events at Marikana. To date, only nine police officers have been charged. Four police officers charged for crimes relating to hiding the circumstances around the death of Mr. Motiso Otsile van Wyk Sagalala have all been acquitted. Currently, six police officers are standing trial for the death of Mr. Pumzile Sokanyile, including then-North West Deputy Police Commissioner Major-General William Mpembe, who is also charged with the murders of mineworkers Mr. Semi Jokanisi, Mr. Thembelakhe Mati and police officers Warrant Officer Tsietsi Hendrik Monene, and Warrant Officer Sello Ronnie Lepaauku. Mpembe is also charged with the attempted murders of six surviving mineworkers and one police officer. To date, however, no one has been charged and prosecuted for the deaths of the mineworkers killed on 16 August 2012.

Marikana exposed the dire state of public order policing in South Africa. The continued lack of accountability for Marikana and the failure to learn from the lessons have resulted in more deaths and injuries since 2012. During the recent unrest and looting that took place in KwaZulu-Natal and Gauteng in July 2021, police appeared ill‑prepared and lacking in capacity. This has understandably been contrasted with police heavy-handed enforcement of the lockdown in 2020, and their disproportionate use of force against past protests and other crowd incidents.

In March this year, the Minister of Police Bheki Cele made public the Panel of Experts Report on Policing and Crowd Management which was submitted in 2018 against the backdrop of the massacre. As part of SERI’s work for justice for the victims of the Marikana massacre, SERI also urges the Minister of Police and the National Commissioner of Police to consider the report, sincerely and urgently, and to implement its recommendations. Were they to do so, South Africa could see a transformed, more effective policing system that protects the safety and rights of members of the public and ensures a more professionalised, demilitarised and accountable police service. 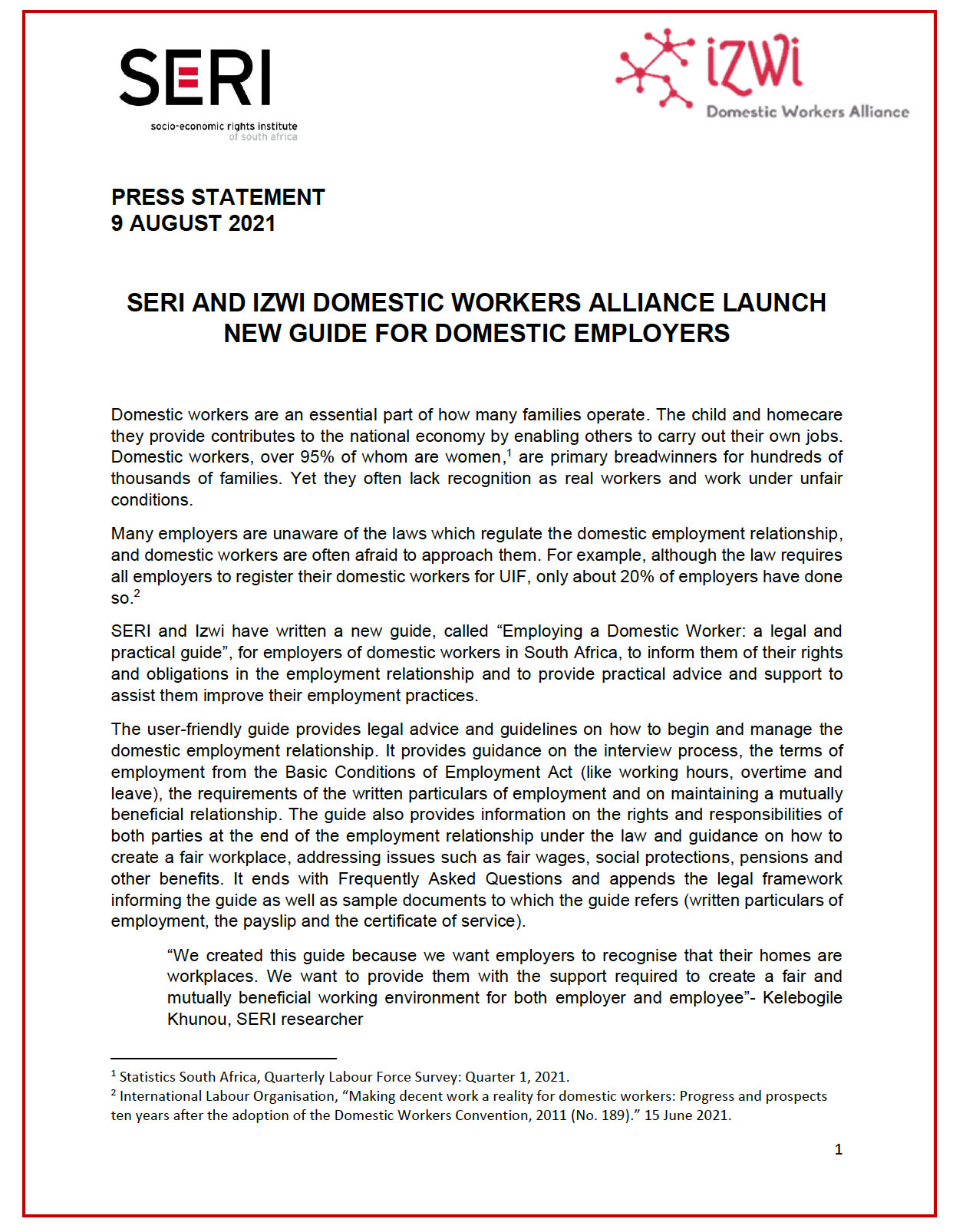 Domestic workers are an essential part of how many families operate. The child and homecare they provide contributes to the national economy by enabling others to carry out their own jobs. Domestic workers, over 95% of whom are women,1 are primary breadwinners for hundreds of thousands of families. Yet they often lack recognition as real workers and work under unfair conditions.

Many employers are unaware of the laws which regulate the domestic employment relationship, and domestic workers are often afraid to approach them. For example, although the law requires all employers to register their domestic workers for UIF, only about 20% of employers have done so.2

SERI and Izwi have written a new guide, called “Employing a Domestic Worker: a legal and practical guide”, for employers of domestic workers in South Africa, to inform them of their rights and obligations in the employment relationship and to provide practical advice and support to assist them improve their employment practices.

The user-friendly guide provides legal advice and guidelines on how to begin and manage the domestic employment relationship. It provides guidance on the interview process, the terms of employment from the Basic Conditions of Employment Act (like working hours, overtime and leave), the requirements of the written particulars of employment and on maintaining a mutually beneficial relationship. The guide also provides information on the rights and responsibilities of both parties at the end of the employment relationship under the law and guidance on how to create a fair workplace, addressing issues such as fair wages, social protections, pensions and other benefits. It ends with Frequently Asked Questions and appends the legal framework informing the guide as well as sample documents to which the guide refers (written particulars of employment, the payslip and the certificate of service).

“We created this guide because we want employers to recognise that their homes are workplaces. We want to provide them with the support required to create a fair and mutually beneficial working environment for both employer and employee”- Kelebogile Khunou, SERI researcher

See also a companion guide: “Domestic Workers’ Rights: a legal and practical guide” and fact sheets on UIF and COIDA.

[2] International Labour Organisation, “Making decent work a reality for domestic workers: Progress and prospects ten years after the adoption of the Domestic Workers Convention, 2011 (No. 189).” 15 June 2021. 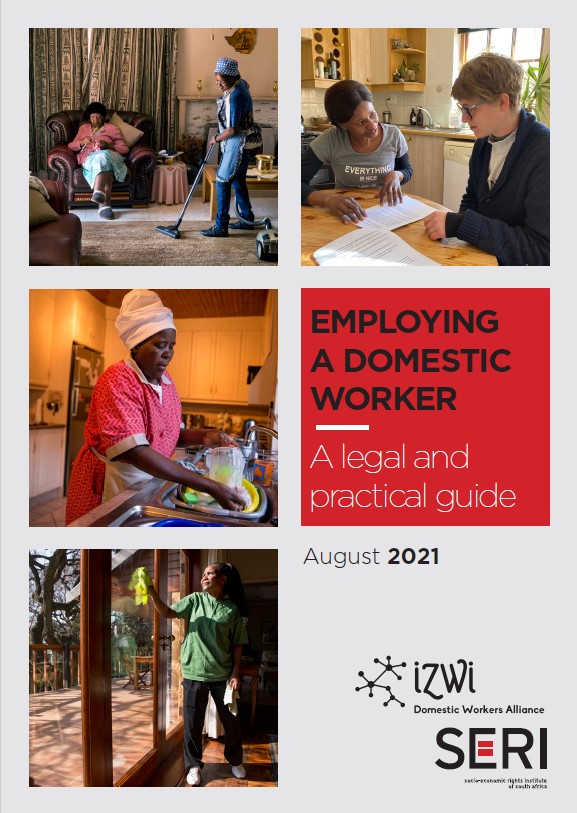 This Women’s Day, SERI launches a new resource guide entitled, Employing a Domestic Worker: a Legal and Practical Guide. This user-friendly guide has been written for employers of domestic workers in South Africa. The guide informs employers of domestic workers of their rights and obligations in the employment relationship, provides practical advice towards creating a healthy working environment and supports them to improve their employment practices. This guide follows the Domestic Workers’ Rights: A Legal and Practical Guide, a guide developed for domestic workers, published in June 2018.

Domestic workers are an essential part of how many families and households operate. The child and home-care they provide contributes to the national economy by enabling others to carry out their own jobs. However, many employers are unaware of the laws which regulate this employment relationship.

The guide provides legal advice and guidelines on the different phases of the employment relationship, namely:

The guide also includes a section on “Creating a fair workplace” which discusses fair wages, social protections, pensions, and other benefits followed by a frequently asked questions section. This guide was produced by the Socio-Economic Rights Institute of South Africa (SERI) and Izwi Domestic Workers Alliance (Izwi). It was written by Kelebogile Khunou (SERI researcher) and Amy Tekié (Izwi co-founder). 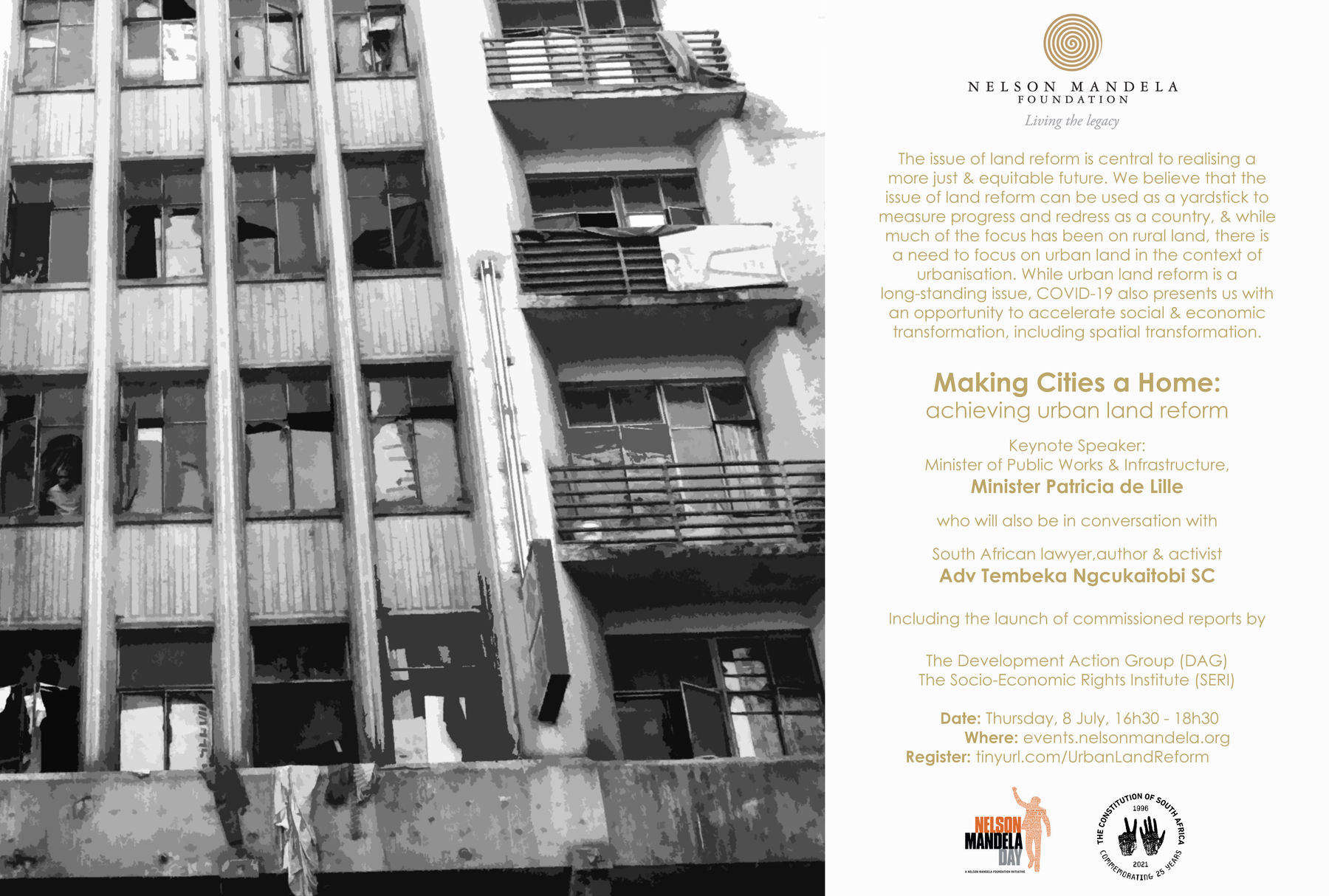 At the dialogue and launch, Nomzamo Zondo spoke alongside, DAG's Querida Daal, where she spoke about the background and motivation for the papers SERI produced which draw largely from SERI's experience of working with inner-city and informal settlement communities. In her inputs, Zondo emphasised the urgent need for the land expropriation tool to be used to acquire and develop the land on which people currently live, and to stop the criminalisation of unlawful occupying communities in urban areas.

SERI and DAG's contributions were followed by a keynote address by Public Works and Infrastructure Minister Patricia de Lille and a conversation between her and Adv. Tembeka Ngcukaitobi SC.

SERI developed summary reports of the urban land redistribution and urban tenure security papers which can be accessed here:

SERI’s submission highlighted a number of concerns with the Bill. They include:

The submission provides specific recommendations for each concern including: that the wealth of progressive jurisprudence in respect of housing and eviction law is taken on board and explicitly acknowledged in the Bill; that the status of the Judges and the Rules of the Land Court be clarified; that a clear transition process is outlined for new cases should the Land Court come into effect; that our significant concerns with the expertise and outlook of Legal  Aid South Africa be addressed; and that the Land Court be established as a court of appeal rather than as a court of first instance.

Overall, SERI is concerned that the Bill in its current state is not perfectly suited to preside over the myriad cases that are currently before the various courts. We therefore recommend that it be amended in line with this submission.