SERI welcomes the decision to acquit Zimbabwean human rights lawyer Beatrice Mtetwa, who was arrested in March 2013 on charges of obstructing the course of justice after she allegedly blocked police from searching her client’s residence. In April 2013 the Commonwealth Lawyers Association (CLA) appointed SERI's executive director Stuart Wilson as an independent trial observer to monitor the criminal proceedings brought against Mtetwa.

On the afternoon of Friday 22 November 2013, Johannesburg Metropolitan Police Department (JMPD) officials assaulted and arrested a number of informal traders in the inner city of Johannesburg. A female trader from Mozambique, who is currently represented by SERI, witnessed the assaults and was subsequently beaten and arrested. This press statement contains an account of the incident drawn from her statement. She remains anonymous as she will be laying charges against the police and fears being victimised. We refer to her in this press statement as “Belinda”.

SERI represents the South African Informal Traders Forum (SAITF) and over 1 200 informal traders who were forcibly removed from their trading sites as part of the 'Mayoral Clean Sweep Initiative', undertaken by the City of Johannesburg and JMPD between 30 September and 31 October 2013.

On 19 November, SAITF and the traders launched an urgent application (Part A) for an order stating that the traders are permitted to trade in a manner consistent with sections 9 and 10 of the City’s Informal Trading By-Laws at the locations they occupied immediately before their removal. The urgent application will be heard on 26 November 2013 in the South Gauteng High Court.

SERI has published its 18 Month Annual Review, covering the period February 2012 to July 2013. The review details SERI's research, litigation and advocacy work over the past 18 months, including financial statements for the period. 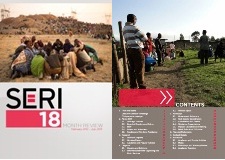 Informal traders to take City of Joburg and JMPD to court over Operation Clean Sweep (14 November 2013).

Today the South African Informal Traders Forum (SAITF) and 1 500 informal traders sent a letter to the City of Johannesburg and the Johannesburg Metropolitan Police Department (JMPD) demanding that they be permitted to return to trading in the inner city. SAITF and the traders intend to bring an application to the Johannesburg High Court to review the decision to forcibly remove them and thousands of other traders under the auspices of the City’s ‘Operation Clean Sweep.’

The informal traders have notified the City that the removal of traders and impoundment of goods during Operation Clean Sweep was unlawful and infringed their constitutional rights. The traders intend to have the decision to implement Operation Clean Sweep reviewed and set aside in court. Pending the institution of legal proceedings, they demand that the City and JMPD permit them to return to trading at the locations they occupied prior to their removal. They should be allowed to re-erect the stands that were removed by the City and JMPD. The latter must refrain from any further removal of informal traders.