[PRESS STATEMENT] SERI stands by claims for damages made by the deceased miners' families against the state (19 August 2021). 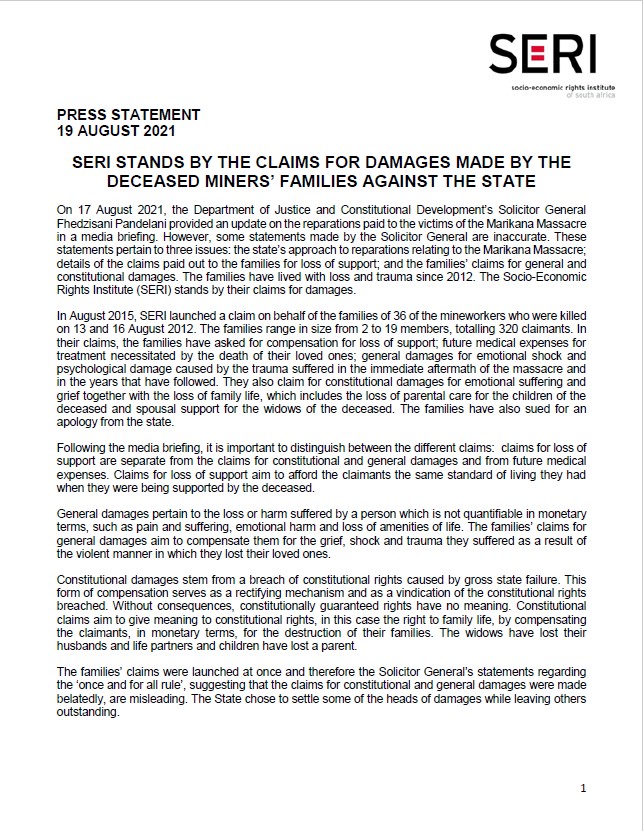 On 17 August 2021, the Department of Justice and Constitutional Development’s Solicitor General Fhedzisani Pandelani provided an update on the reparations paid to the victims of the Marikana Massacre in a media briefing. However, some statements made by the Solicitor General are inaccurate. These statements pertain to three issues: the state’s approach to reparations relating to the Marikana Massacre; details of the claims paid out to the families for loss of support; and the families’ claims for general and constitutional damages. The families have lived with loss and trauma since 2012. The Socio-Economic Rights Institute (SERI) stands by their claims for damages.

In August 2015, SERI launched a claim on behalf of the families of 36 of the mineworkers who were killed on 13 and 16 August 2012. The families range in size from 2 to 19 members, totalling 320 claimants. In their claims, the families have asked for compensation for loss of support; future medical expenses for treatment necessitated by the death of their loved ones; general damages for emotional shock and psychological damage caused by the trauma suffered in the immediate aftermath of the massacre and in the years that have followed. They also claim for constitutional damages for emotional suffering and grief together with the loss of family life, which includes the loss of parental care for the children of the deceased and spousal support for the widows of the deceased. The families have also sued for an apology from the state.

General damages pertain to the loss or harm suffered by a person which is not quantifiable in monetary terms, such as pain and suffering, emotional harm and loss of amenities of life. The families’ claims for general damages aim to compensate them for the grief, shock and trauma they suffered as a result of the violent manner in which they lost their loved ones.

The families’ claims were launched at once and therefore the Solicitor General’s statements regarding the ‘once and for all rule’, suggesting that the claims for constitutional and general damages were made belatedly, are misleading. The State chose to settle some of the heads of damages while leaving others outstanding.

To date, the State has settled the loss of support claim for 34 families and paid out just over R70 million. The amounts paid out to each family were actuarially calculated and these payments were made in three tranches in August 2018, November 2018 and September 2019. The state chose the actuary. The calculation was based partly on how many more years of employment the deceased had prior to reaching pension age, at the time of death. As such, individual families received payments for loss of support ranging from approximately R100 000 to R3 million. SERI received an offer for the 35th family and was informed that the State would not provide compensation for the 36th family as it believed that the deceased miner did not have a duty to support his unemployed siblings because he was raised in a child‑headed household.

According to the pleadings filed by the families, they have submitted claims for Constitutional and general damages as well as future medical expenses either as children, widows, parents or siblings of the deceased miners, for example. In response, the State has made an offer of R500 000 per family, which the families have rejected. They rejected the state’s offer on the basis that the state has a duty to compensate individuals for their individual loss and suffering as opposed to compensating them collectively as a family. SERI has argued that the figure of R500 000 is irrational and has no basis because an offer to pay each family as a collective would disadvantage families that are much larger in size. The Solicitor General’s assertion that families have claimed R1.5 million per claimant is incorrect. The families made a counter-claim of R1.5 million per family if the state remained unwilling to entertain the claims made for individual claimants. SERI remains amenable to good faith negotiations.

In October 2020, the families sent a letter to the State suggesting the establishment of a Marikana Welfare Fund that would take the form of a monthly grant to the widows of the deceased miners, allowing the widows to provide for their families. The State responded months later seeking direction from the families on how it could establish such fund and the legal basis for it.

Since 2012, the families have had to live with the ripple-effects of the trauma of violently losing a loved one at the hands of the state. Some of the widows had to take up work in the mine in order to provide for their families after the death of their breadwinners. Some of the children had to drop out of school in order to help support their families. The mother of one of the deceased miner’s collapsed and died, immediately after learning of the death of her loved one. A child of another deceased miner committed suicide due to incessant bullying resulting from how his father was characterised following the massacre. Their trauma is compounded by the absence of both accountability for the deaths of their loved ones and contrition by the state for what happened at Marikana. Such suffering cannot ever be fully accounted for. However, these claims are an attempt to ease the burden of what this massacre has done to the families.

Notwithstanding these inaccuracies and disagreement, SERI welcomes the State’s openness regarding outstanding claims for the Marikana massacre. SERI also welcomes the appointment of a designated point-person for dealing with all the claims relating to the massacre. It is in the interests of all involved for the State to efficiently address the outstanding claims for damages.