[PRESS STATEMENT] SERI welcomes the release of the Marikana Panel of Experts Report on Policing and Crowd Management (31 March 2021). 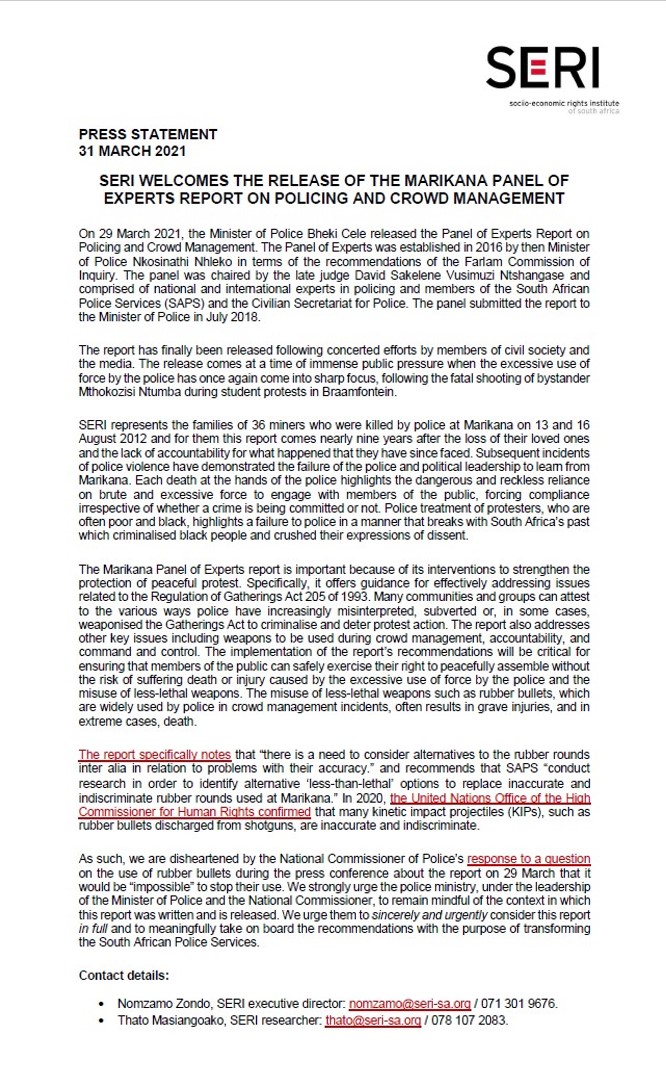 On 29 March 2021, the Minister of Police Bheki Cele released the Panel of Experts Report on Policing and Crowd Management. The Panel of Experts was established in 2016 by then Minister of Police Nkosinathi Nhleko in terms of the recommendations of the Farlam Commission of Inquiry. The panel was chaired by the late judge David Sakelene Vusimuzi Ntshangase and comprised of national and international experts in policing and members of the South African Police Services (SAPS) and the Civilian Secretariat for Police. The panel submitted the report to the Minister of Police in July 2018.

The report has finally been released following concerted efforts by members of civil society and the media. The release comes at a time of immense public pressure when the excessive use of force by the police has once again come into sharp focus, following the fatal shooting of bystander Mthokozisi Ntumba during student protests in Braamfontein.

SERI represents the families of 36 miners who were killed by police at Marikana on 13 and 16 August 2012 and for them, this report comes nearly nine years after the loss of their loved ones and the lack of accountability for what happened that they have since faced. Subsequent incidents of police violence have demonstrated the failure of the police and political leadership to learn from Marikana. Each death at the hands of the police highlights the dangerous and reckless reliance on brute and excessive force to engage with members of the public, forcing compliance irrespective of whether a crime is being committed or not. Police treatment of protesters, who are often poor and black, highlights a failure to police in a manner that breaks with South Africa’s past which criminalised black people and crushed their expressions of dissent.

The Marikana Panel of Experts report is important because of its interventions to strengthen the protection of peaceful protest. Specifically, it offers guidance for effectively addressing issues related to the Regulation of Gatherings Act 205 of 1993. Many communities and groups can attest to the various ways police have increasingly misinterpreted, subverted or, in some cases, weaponised the Gatherings Act to criminalise and deter protest action. The report also addresses other key issues including weapons to be used during crowd management, accountability, and command and control. The implementation of the report’s recommendations will be critical for ensuring that members of the public can safely exercise their right to peacefully assemble without the risk of suffering death or injury caused by the excessive use of force by the police and the misuse of less-lethal weapons. The misuse of less-lethal weapons such as rubber bullets, which are widely used by police in crowd management incidents, often results in grave injuries, and in extreme cases, death.

The report specifically notes that “there is a need to consider alternatives to the rubber rounds inter alia in relation to problems with their accuracy.” and recommends that SAPS “conduct research in order to identify alternative ‘less-than-lethal’ options to replace inaccurate and indiscriminate rubber rounds used at Marikana.” In 2020, the United Nations Office of the High Commissioner for Human Rights confirmed that many kinetic impact projectiles (KIPs), such as rubber bullets discharged from shotguns, are inaccurate and indiscriminate.

As such, we are disheartened by the National Commissioner of Police’s response to a question on the use of rubber bullets during the press conference about the report on 29 March that it would be “impossible” to stop their use. We strongly urge the police ministry, under the leadership of the Minister of Police and the National Commissioner, to remain mindful of the context in which this report was written and is released. We urge them to sincerely and urgently consider this report in full and to meaningfully take on board the recommendations with the purpose of transforming the South African Police Services.