[MARIKANA] SERI invites you to join the 10th commemoration of the Marikana massacre (3 August 2022). 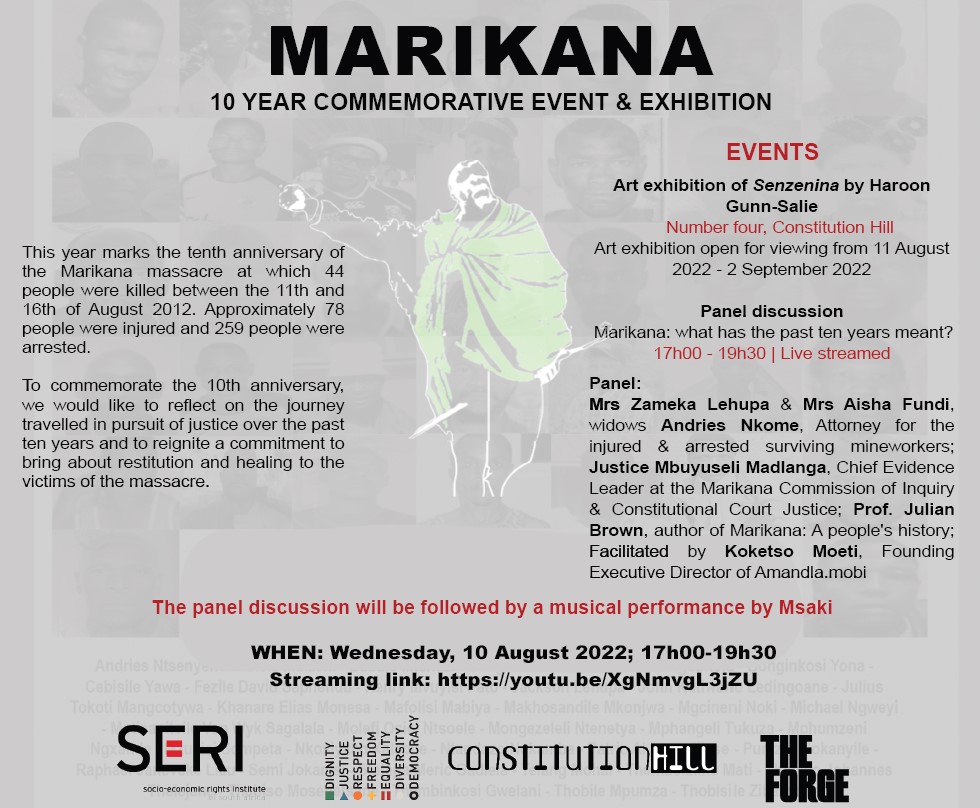 On 10 August 2022, SERI will commemorate the tenth anniversary of the Marikana massacre, in partnership with Constitution Hill and the Forge.

On 10 August 2012, mineworkers from then Lonmin mine embarked on a strike demanding a wage increase and an improvement in living and working conditions. In a series of clashes between 12 August and 14 August, ten people including three mineworkers, two police officers, and five security guards were killed. On 16 August 2012, police killed 34 mineworkers. The Marikana massacre caused the highest number of fatalities in a single policing incident in post-apartheid South Africa.

To commemorate the 10th anniversary of the Marikana massacre, SERI would like to take stock of the journey travelled over the past ten years. As part of this, SERI will host a panel discussion to reflect on what the last ten years have meant by hearing from a range of perspectives including the families and surviving mineworkers, what it has meant for the law and the pursuit of justice, and to reflect on how the Marikana massacre has featured in South Africa's collective conscience. The panel discussion will be followed by a performance by Msaki.

In addition, an installation of Senzenina, a sculptural artwork created by artist Haroon Gunn-Salie will be housed at Number Four, atConstitution Hill, and will be available for viewing from 11 August to 2 September 202. The artwork is inspired by the #MarikanaMassacre.