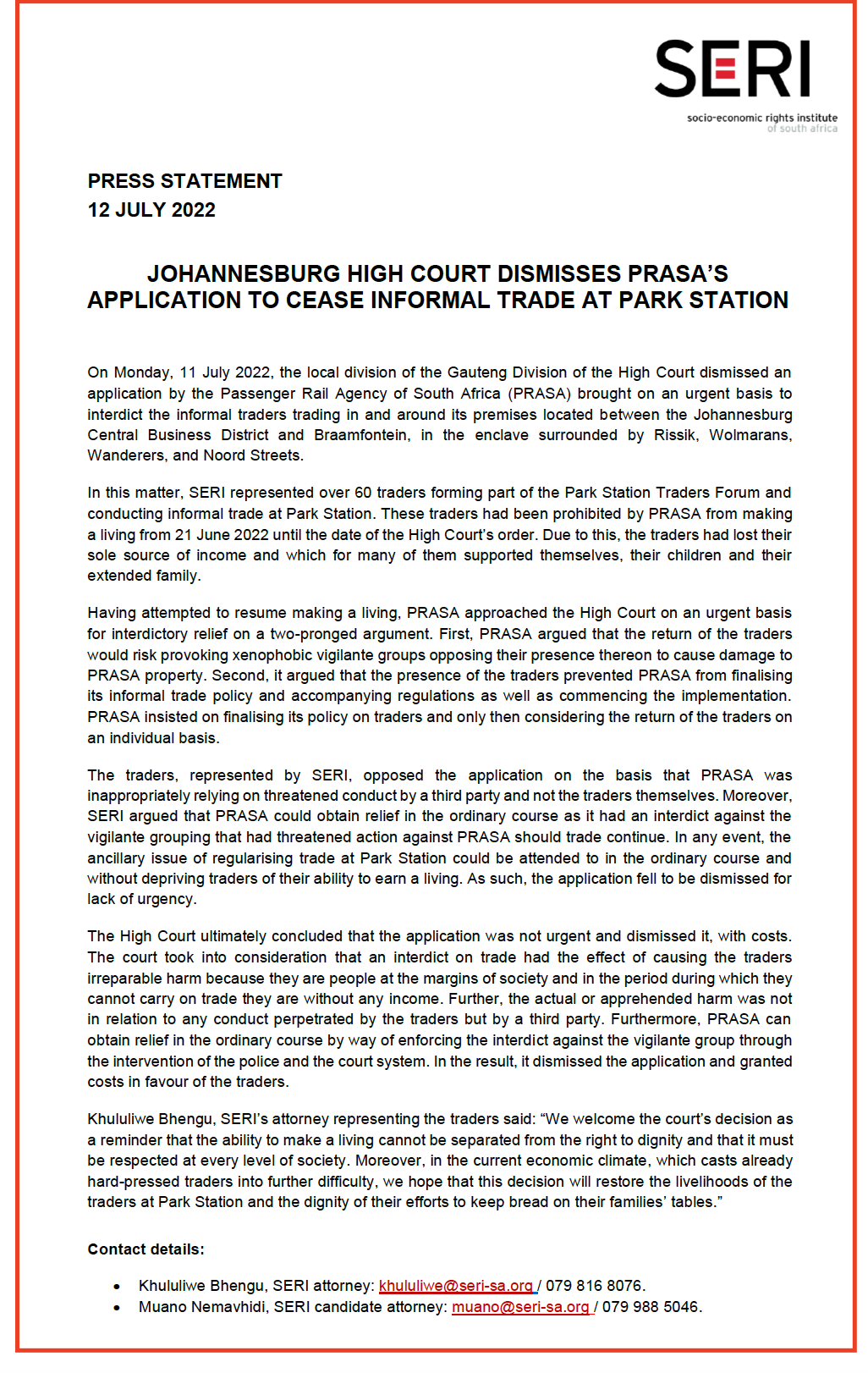 On Monday, 11 July 2022, the local division of the Gauteng Division of the High Court dismissed an application by the Passenger Rail Agency of South Africa (PRASA) brought on an urgent basis to interdict the informal traders trading in and around its premises located between the Johannesburg Central Business District and Braamfontein, in the enclave surrounded by Rissik, Wolmarans, Wanderers, and Noord Streets.

In this matter, SERI represented over 60 traders forming part of the Park Station Traders Forum and conducting informal trade at Park Station. These traders had been prohibited by PRASA from making a living from 21 June 2022 until the date of the High Court’s order. Due to this, the traders had lost their sole source of income and which for many of them supported themselves, their children and their extended family.

Having attempted to resume making a living, PRASA approached the High Court on an urgent basis for interdictory relief on a two-pronged argument. First, PRASA argued that the return of the traders would risk provoking xenophobic vigilante groups opposing their presence thereon to cause damage to PRASA property. Second, it argued that the presence of the traders prevented PRASA from finalising its informal trade policy and accompanying regulations as well as commencing the implementation. PRASA insisted on finalising its policy on traders and only then considering the return of the traders on an individual basis.

The traders, represented by SERI, opposed the application on the basis that PRASA was inappropriately relying on threatened conduct by a third party and not the traders themselves. Moreover, SERI argued that PRASA could obtain relief in the ordinary course as it had an interdict against the vigilante grouping that had threatened action against PRASA should trade continue. In any event, the ancillary issue of regularising trade at Park Station could be attended to in the ordinary course and without depriving traders of their ability to earn a living. As such, the application fell to be dismissed for lack of urgency.

The High Court ultimately concluded that the application was not urgent and dismissed it, with costs. The court took into consideration that an interdict on trade had the effect of causing the traders irreparable harm because they are people at the margins of society and in the period during which they cannot carry on trade they are without any income. Further, the actual or apprehended harm was not in relation to any conduct perpetrated by the traders but by a third party. Furthermore, PRASA can obtain relief in the ordinary course by way of enforcing the interdict against the vigilante group through the intervention of the police and the court system. In the result, it dismissed the application and granted costs in favour of the traders.

Khululiwe Bhengu, SERI’s attorney representing the traders said: “We welcome the court’s decision as a reminder that the ability to make a living cannot be separated from the right to dignity and that it must be respected at every level of society. Moreover, in the current economic climate, which casts already hard-pressed traders into further difficulty, we hope that this decision will restore the livelihoods of the traders at Park Station and the dignity of their efforts to keep bread on their families’ tables.”