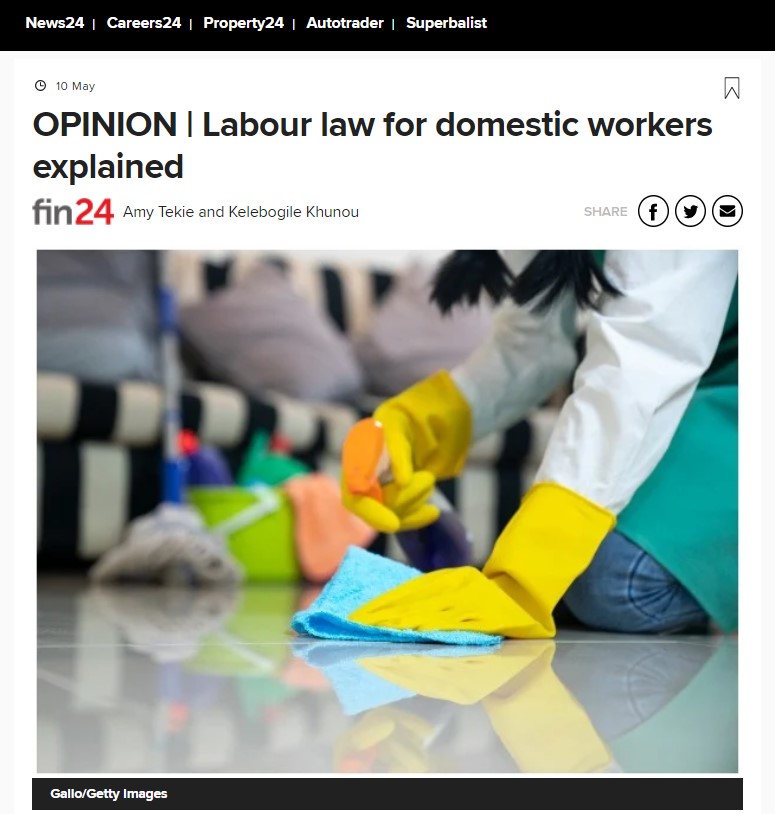 On 10 May 2022, Fin24 published and opinion editorial written by Izwi's Amy Tekie and SERI researcher Kelebogile Khunou entitled, 'Labour law for domestic workers explained'. The op-ed explains the recent changes in labour laws affecting domestic workers. As of 1 March 2022, employers of domestic workers are required to pay their employees a minimum wage of R23.19 per hour, as announced by Minister for Employment and Labour, Thulas Nxesi.

Tekie and Khunou write that: "This translates to approximately R4 019.57 per month for a 40-hour work-week and R4 522.02 for 45 hours per week. Overtime must be paid for any hours worked beyond 45 hours, and should be paid at 1.5 times the employee’s normal wage. Overtime pay for domestic workers is R34.79 per hour at minimum."

They add, however, that "For sole income providers, the national minimum wage is usually not sufficient to meet a family’s basic needs. According to Statistics South Africa, the food poverty line, also known as the "extreme" poverty line, is R624 per person per month. A domestic worker earning the minimum wage, just over R4 000 per month, supporting a family of four, would have to spend more than 50% of her salary on meeting the family’s basic needs; less than R2 500 would have to cover non-food household costs like rent, water, electricity, transport, education and others. In situations like these, food needs often must be sacrificed in order to meet other requirements, which are still not adequately met."