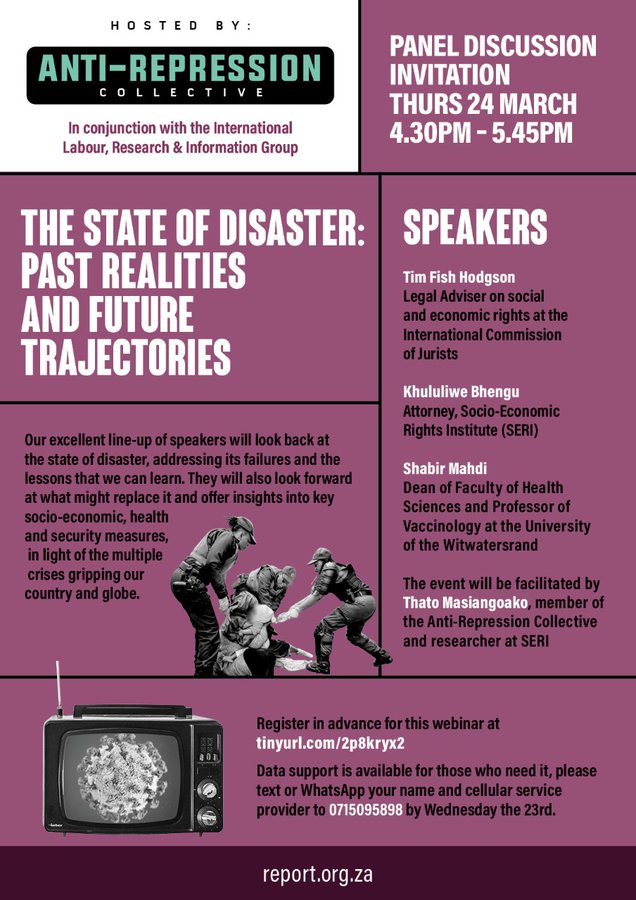 On 24 March 2022, the Anti-Repression Collective (ARC) hosted a webinar panel discussion entitled "State of Disaster: Past realities and future trajectories". The aim of the webinar was to reflect on the lessons that South Africa could learn from its National State of Disaster and to discuss what could be expected when it would eventually be lifted. SERI’s Khululiwe Bhengu participated in the discussion as a panelist alongside Tim Fish Hodgson, legal advisor at the International Commission of Jurists, and Prof. Shabir Madhi, Dean of the Faculty of Health Sciences and Professor of Vaccinology at the University of the Witwatersrand. SERI's Thato Masiangoako facilitated the discussion.

Khululiwe discussed some of the work that SERI did during the lockdown with informal traders, waste reclaimers and informal settlement residents. She argued that the overwhelming impact of the hard lockdown on poor communities was that many people lost their ability to earn a living and unfortunately, many of the regulations were impractical and difficult to abide by under socio-economic conditions that worsened under the lockdown.