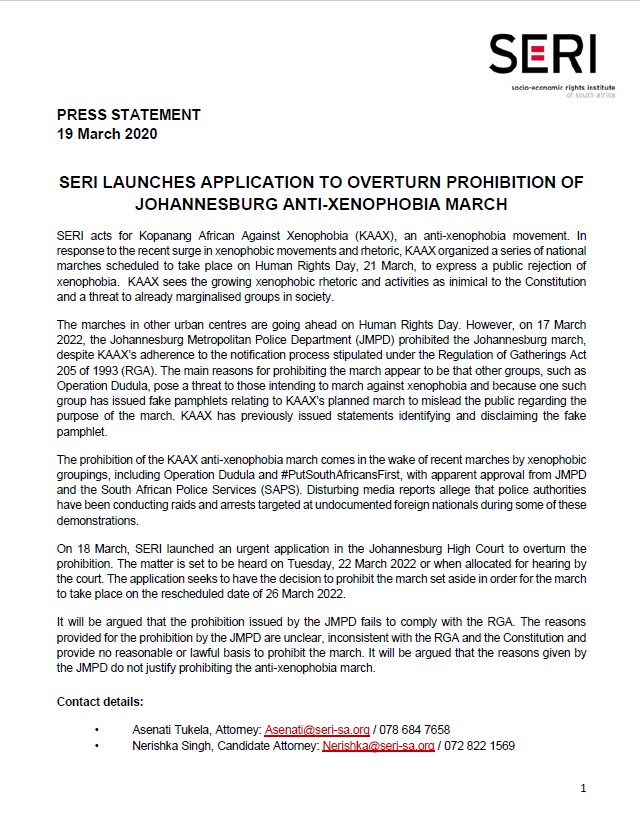 SERI acts for Kopanang African Against Xenophobia (KAAX), an anti-xenophobia movement. In response to the recent surge in xenophobic movements and rhetoric, KAAX organized a series of national marches scheduled to take place on Human Rights Day, 21 March, to express a public rejection of xenophobia.  KAAX sees the growing xenophobic rhetoric and activities as inimical to the Constitution and a threat to already marginalised groups in society.

The marches in other urban centres are going ahead on Human Rights Day. However, on 17 March 2022, the Johannesburg Metropolitan Police Department (JMPD) prohibited the Johannesburg march, despite KAAX’s adherence to the notification process stipulated under the Regulation of Gatherings Act 205 of 1993 (RGA). The main reasons for prohibiting the march appear to be that other groups, such as Operation Dudula, pose a threat to those intending to march against xenophobia and because one such group has issued fake pamphlets relating to KAAX’s planned march to mislead the public regarding the purpose of the march. KAAX has previously issued statements identifying and disclaiming the fake pamphlet.

The prohibition of the KAAX anti-xenophobia march comes in the wake of recent marches by xenophobic groupings, including Operation Dudula and #PutSouthAfricansFirst, with apparent approval from JMPD and the South African Police Services (SAPS). Disturbing media reports allege that police authorities have been conducting raids and arrests targeted at undocumented foreign nationals during some of these demonstrations.

On 18 March, SERI launched an urgent application in the Johannesburg High Court to overturn the prohibition. The matter is set to be heard on Tuesday, 22 March 2022 or when allocated for hearing by the court. The application seeks to have the decision to prohibit the march set aside in order for the march to take place on the rescheduled date of 26 March 2022.