On 13 and 14 October, public interest legal services (PILS) organisations held the 2021 Public Interest Law Gathering (PILG) which was the first ever to be held virtually. At this year’s PILG, SERI’s Yvonne Erasmus shared information about the Public Interest Legal Sector website that connects the public with PILS organisations.

Khunou introduced and contextualised the panel’s focus by reflecting on the context and scale of informal and precarious work as a share of the world’s population and the global economy. The International Labour Organization (ILO) estimates that 61% of the world's workers earn their living in the informal economy making a majority of the world's workforce informal. In South Africa, Women in Employment: Globalizing and Organizing (WIEGO) estimated that around 30% of total employment is informal, which includes just under 5 million workers. 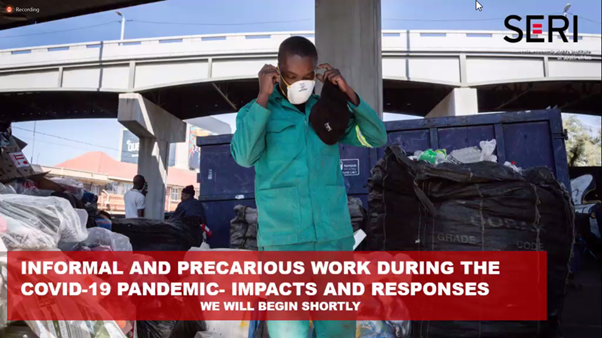 It was further noted that, according to the ILO, work in the informal economy is often characterised by “small or undefined workplaces, unsafe and unhealthy working conditions, low levels of skills and productivity, low or irregular incomes, long working hours and lack of access to information, markets, finance, training, and technology”. Furthermore, workers in the informal economy are not recognised, registered, regulated, or protected under labour legislation and social protection. However, despite exclusion, the informal economy is a significant component of South Africa’s national economy, contributing approximately 5% to South Africa’s GDP.

Khunou also provided a brief overview of how South Africa’s approach to the COVID-19 pandemic impacted informal and precarious workers’ ability to earn a living, namely the loss of income for non-essential workers due to the restrictions on movement in the lockdown period and the exclusion of informal workers from the COVID-19 Temporary Employer/Employee Relief Scheme (TERS). The panelists unpacked government’s support in respect of waste reclaimers, informal traders, and domestic workers in greater detail.

ARO’s Eva Mokoena reflected on some of the hardships that waste reclaimers experienced during the lockdown, in particular, food insecurity caused by their inability to earn an income due to the restrictions on movement. Thandeka Chauke expanded on the difficulties faced by waste reclaimers during the lockdown and spoke about LHR’s litigation in April 2020 on behalf of groups of informal waste reclaimers based in the City of Tshwane. The application sought to challenge the lockdown regulations in so far as they did not include reclaimers as “essential workers”. LHR emphasised the severity of this omission as it deprived reclaimers of the ability to support their families in a context where they had been excluded from all forms of government support.

Nerishka Singh discussed the legal support SERI provided to informal traders in the City of Johannesburg and eThekwini Municipality and discussed how the lockdown regulations and uneven police enforcement of municipal by-laws negatively affected their ability to earn a living. In the case of Johannesburg, she spoke about how a private actor capitalised on the municipality’s lack of involvement and support for informal trade, by attempting to use the COVID-19 health and safety protocols to prohibit trading, even though the traders had already self-imposed COVID-19 complaint practices.

Lastly, Kelly Kropman discussed how domestic workers who were not registered by their employers with the Unemployment Insurance Fund (UIF) were unable to benefit from the TERS. Kropman Attorneys worked closely with Izwi Domestic Workers Alliance, the Casual Workers Advice Office and Women on Farms to engage the Department of Labour, advocating for allowing workers themselves to apply for TERS and to remove UIF contribution as a prerequisite to benefit from TERS.