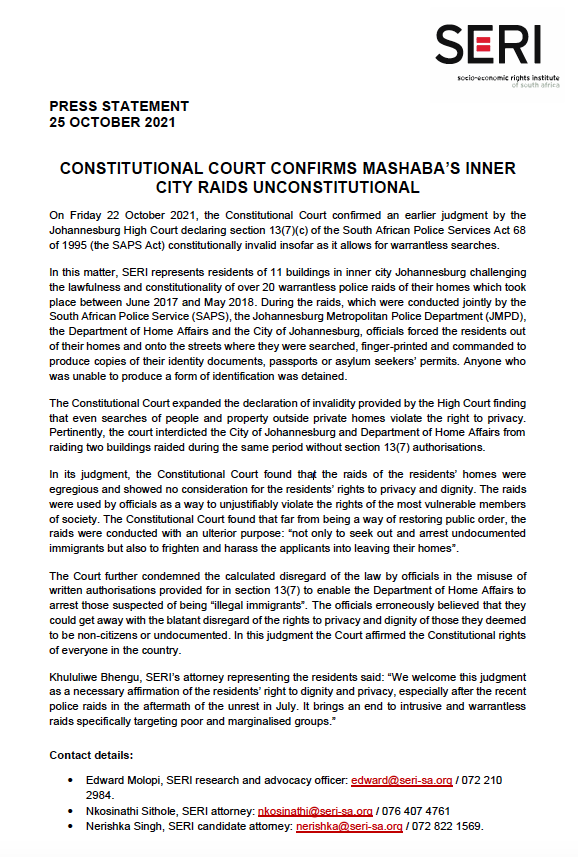 On Friday 22 October 2021, the Constitutional Court confirmed an earlier judgment by the Johannesburg High Court declaring section 13(7)(c) of the South African Police Services Act 68 of 1995 (the SAPS Act) constitutionally invalid insofar as it allows for warrantless searches.

In this matter, SERI represents residents of 11 buildings in inner city Johannesburg challenging the lawfulness and constitutionality of over 20 warrantless police raids of their homes which took place between June 2017 and May 2018. During the raids, which were conducted jointly by the South African Police Service (SAPS), the Johannesburg Metropolitan Police Department (JMPD), the Department of Home Affairs and the City of Johannesburg, officials forced the residents out of their homes and onto the streets where they were searched, finger-printed and commanded to produce copies of their identity documents, passports or asylum seekers’ permits. Anyone who was unable to produce a form of identification was detained.

The Constitutional Court expanded the declaration of invalidity provided by the High Court finding that even searches of people and property outside private homes violate the right to privacy. Pertinently, the court interdicted the City of Johannesburg and Department of Home Affairs from raiding two buildings raided during the same period without section 13(7) authorisations.

In its judgment, the Constitutional Court found that the raids of the residents’ homes were egregious and showed no consideration for the residents’ rights to privacy and dignity. The raids were used by officials as a way to unjustifiably violate the rights of the most vulnerable members of society. The Constitutional Court found that far from being a way of restoring public order, the raids were conducted with an ulterior purpose: “not only to seek out and arrest undocumented immigrants but also to frighten and harass the applicants into leaving their homes”.

The Court further condemned the calculated disregard of the law by officials in the misuse of written authorisations provided for in section 13(7) to enable the Department of Home Affairs to arrest those suspected of being “illegal immigrants”. The officials erroneously believed that they could get away with the blatant disregard of the rights to privacy and dignity of those they deemed to be non-citizens or undocumented. In this judgment the Court affirmed the Constitutional rights of everyone in the country.

Khululiwe Bhengu, SERI’s attorney representing the residents said: “We welcome this judgment as a necessary affirmation of the residents’ right to dignity and privacy, especially after the recent police raids in the aftermath of the unrest in July. It brings an end to intrusive and warrantless raids specifically targeting poor and marginalised groups.”