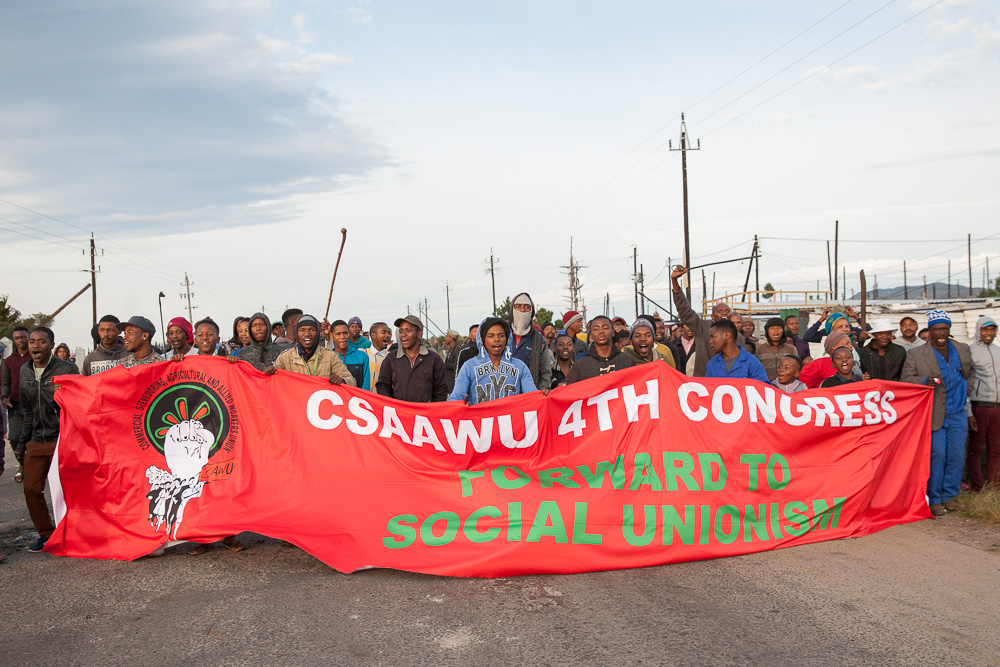 On 31 August 2021, SERI will appear before the Constitutional Court on behalf of the Commercial, Stevedoring, Agricultural & Allied Workers Union (CSAAWU) and 173 employees to challenge an overbroad interdict that prohibited CSAAWU, striking workers, and unknown persons from protesting at Oak Valley Estates, a large farming estate in Grabouw, Western Cape.

CSAAWU began a protected strike on 6 May 2019 under picketing rules established by the CCMA. The workers went on strike to demand an increase in salary from R15 to R18 ($.86 to $1.03) per hour, an end to labour brokers, and an end to unfair and discriminatory housing practices forcing black workers to live in cramped single-sex hostels while their white and coloured counterparts were given familial accommodation.

After a few days of protesting, Oak Valley approached the Labour Court to interdict what it claimed were breaches of the picketing rules, mainly for the workers picketing outside the picketing area identified in the rules, interference with its customers, suppliers and nonstriking employees and “unlawful and criminal conduct”.

Amongst the arguments that SERI made in opposing the interdict was that the Labour Court could not interdict the strikers for criminal conduct when none of the conduct complained of could be linked to them. However, the court did not deem it necessary to determine if those interdicted were in any way linked to the conduct the employers wanted to interdict and on 21 June 2019, the court interdicted CSAAWU and all the strikers from committing unlawful and criminal conduct in furtherance of the strike.

On 6 August 2019, CSAAWU was granted leave to appeal to Labour Appeal Court, which was adjudicated in May 2020. However, SERI has now appealed to the Constitutional Court to obtain a decisive decision against the abuse of interdicts to silence activists.

SERI argues that "to restrain a striker or protestor from unlawful conduct which it has not been demonstrated they actually committed is inconsistent with the rule of law. It threatens to have a profound chilling effect on both the right to strike, and the right to protest."