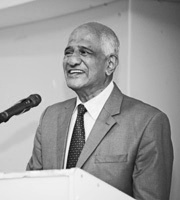 Justice Zak Yacoob was appointed as SERI’s Patron in May 2013, and as a member of its Board of Directors in October 2015. Justice Yacoob served as a Justice of the Constitutional Court of South Africa from 1998 to 2013, during which time he wrote a number of groundbreaking judgments for socio-economic rights. These include Grootboom, Olivia Road, Mooiplaats, Skurweplaas and Motswagae.

Prior to his appointment to the Constitutional Court, Justice Yacoob practised as an advocate in the former Natal Provincial Division, taking silk in 1991. During his time as an advocate he represented and advised many people prosecuted for contravening security laws, emergency measures and other oppressive legislation, victims of unfair evictions and people who were required to pay unfair tariffs. As a member of the executive of the Durban Housing Action Committee from 1982 to 1985, he was involved in action aimed at ensuring that the Durban City Council managed its housing schemes fairly. Justice Yacoob has also been a member of the Democratic Lawyers Association, the United Democratic Front (UDF) and was a member of the underground structures of the African National Congress (ANC).

He also served on the Independent Electoral Commission from December 1993 to June 1994, during the first democratic elections in South Africa, and was a member of the Panel of Independent Experts of the Constitutional Assembly. He has advised local government bodies, the National Land Committee and the Department of Finance. In 2011, he was awarded an honorary doctorate by the University of KwaZulu-Natal.