The South African Informal Traders Forum (SAITF) and over 1 200 informal traders have applied to the Constitutional Court for leave to appeal the South Gauteng High Court order handed down on 27 November, which struck the traders’ case from the roll.

SAITF wants the matter dealt with urgently and for the Constitutional Court to place the traders – who have always traded lawfully – in a position to continue with their lawful business activities, pending the determination of the appeal (either to the Constitutional Court or to a Full Bench of the High Court). This trading would occur in line with the City of Johannesburg’s Informal Trading By-Laws at the locations the traders occupied immediately before their removal in terms of Operation Clean Sweep.

On 2 December, the Constitutional Court issued directions to the City and the other respondents, directing them to file an opposing affidavit on or before 3 December if they wish to oppose the urgent application for interim relief. According to the Chief Justice, the opposing affidavit must set out why the interim relief sought by the traders in terms of Part A of the High Court application should not be granted pending the determination of Part B. On 4 December 2013 the City filed its notice to oppose and asnwering affidavit.

On 28 November 2013, SERI and the Centre for Urbanism and Built Environment Studies (CUBES) officially launched two resource guides aimed at tenants and sectional title owners. The first, entitled A Tenant's Guide to Rental Housing, is aimed at assisting tenants to navigate the start, duration and end of the landlord-tenant relationship. As a companion to this, SERI has also published a separate guide called Rental Housing in South Africa: Legislation, Regulations and Case Law which includes the Rental Housing Act and the Gauteng Unfair Practices Regulations printed in full together with some guidelines to help readers navigate the content.

The second CUBES and SERI resource guide launched is called A Guide to Sectional Title in South Africa, which provides a brief description and explanation of the main issues that those involved in sectional title schemes should be aware of. It deals with a number of key questions that are commonly raised, and also lays out how certain disputes and challenges should be dealt with.

On 27 November 2013, SERI was presented with The Institute for Justice and Reconciliation's (IJR) 2012 Reconciliation Award, "for keeping the Marikana victims and their families on the national agenda." It was handed over to SERI by IJR's patron, Archbishop Emeritus Desmond Tutu, at a ceremony held in Cape Town . Stuart Wilson, Teboho Mosikili, Naadira Munshi and Khuselwa Dyantyi attended the award ceremony on behalf of SERI.

According to the IJR, "the Reconciliation Award honours those who make a special effort to bring South Africans together in the spirit of reconciliation and justice. SERI has indeed contributed significantly to national reconciliation through their sterling representation of the families of the victims of the Marikana tragedy in 2012, not only at the Commission of Inquiry but also in the national and international press." 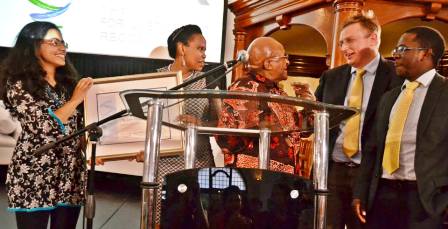 The third article in the Know Your Constitution campaign was published in the Daily Maverick on 26 November, written by Thapelo Tselapedi and Jackie Dugard. The article argues that first step in creating an active citizenry is information, and that much of the information needed for active citizenship is set out in the Constitution. However, as pointed out in the previous articles that are part of this series, copies of the Constitution are not as widely and freely available as they should be.

On 27 November, an op-ed by Michael Clark and Kate Tissington was published in the Daily Maverick looking at the inner city informal trading crisis and its links with the inner city housing crisis. The op-ed argues that the City of Johannesburg is trying to airbrush the symptoms of poverty and unemployment out of the cityscape rather than acknowledging its obligations and proactively provides for all income groups, on the streets and in their homes.