On 2 September 2013, an urgent interdict was granted by the Durban High Court preventing Thekwini Municipality from demolishing the homes of residents of Cato Crest informal settlement without a court order. On 1 and 2 September 2013 the municipality illegally demolished shacks at the settlement, in violation of an undertaking made to the Durban High Court on 22 August 2013 that it would halt evictions pending the finalisation of the application for a final order. Assisted by Abahlali baseCato Crest, a newly formed branch of Abahlali baseMjondolo, the residents went to the Durban High Court on an urgent basis to stop the evictions.

The court order obtained interdicts and restrains the municipality from evicting the named Cato Crest residents or demolishing their structures without a court order. It further orders the municipality to construct “temporary habitable dwellings that afford shelter, privacy and amenities at least equivalent to those destroyed, and which are capable of being dismantled, at the site at which their previous informal housing structures were demolished” to the residents whose shacks were demolished on 1 and 2 September.

Despite this interdict, the municipality continued to demolish shacks. The residents were forced to return to court on 6 September to apply for a contempt of court order. The judge granted a rule nisi (interim order) compelling the Municipal Manager of eThekwini Municipality and the Head of the municipality's Land Invasion Unit to appear at court on 12 September to explain why they should not be imprisoned for 30 days for allowing illegal evictions at Cato Crest in contempt of the order obtained on 2 September.

The residents were represented in court by SERI's correspondent in Durban, Nichols Attorneys, and Adv David Saks.

On 30 August 2013, the 33 residents of Ekuthuleni shelter, relocated after the landmark Blue Moonlight judgment, filed their replying affidavits in the Dladla application. This application is essentially about whether the City of Johannesburg (and Metropolitan Evangelical Services, which runs the shelter on the City's behalf) can lawfully and constitutionally evict the residents from the shelter without a court order; apply a gender-differentiation rule so rigidly as to split residents up from their spouses, partners and children; and lock everyone out of the shelter during the day.

This main affidavit by Paul Maobelo refers to two supporting affidavits which interrogate some of the key aspects of the City and MES' opposition to the application. The first affidavit - by Garth Stevens, a clinical psychologist and associate professor at the University of the Witwatersrand - deals with the regime enforced at Ekuthuleni and its appropriateness as part of an intervention intended to assist recently evicted and relocated people. He concludes that "the daytime lockout rule, the gender-separation rule and the time limitations placed on the residents at the Ekuthuleni shelter are harmful to the residents’ psychological well-being, corrosive of their self-respect and dignity and unlikely to empower them to find their own accommodation within six or twelve months, or at all." The second affidavit - by Lauren Royston, a development planner and informal housing specialist - investigates the availability of low-cost rental housing in Johannesburg for people in the financial position of the residents. She concludes from her research that "there is no accommodation other than the shelter which is practically available and accessible to the residents at present. Without a fundamental change in the structure of the rental housing market...this is unlikely to change in the foreseeable future." 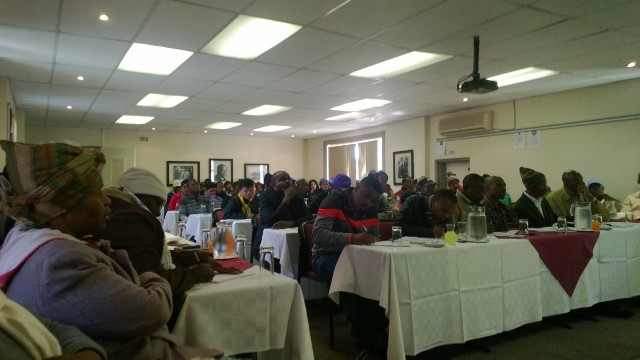 On 24 August 2013, SERI hosted a workshop in Yeoville for over 100 residents living in four inner city buildings provided by the City of Johannesburg following the Olivia Road and Blue Moonlight Constitutional Court judgments. Residents from MBV 1 and Old Perm (managed by the City), Ekuthuleni shelter (managed by MES) and MBV 2 (managed by JOSHCO) attended the workshop, which provided an overview of the current litigation and facilitated a discussion on current challenges in the buildings and strategies to deal with them moving forward. It was decided that a joint commitee comprising representatives from all the buildings will be elected to take various aspects of the workshop forward.

Berea residents restored to their homes after eviction (20 August 2013).

On 14 August, Judge Mathopo in the South Gauteng High Court ordered that the residents be restored to the property pending the outcome of the rescission application. The order was executed that evening.