SERI's October 2014 Newsletter is out! The last five months have been a busy period for us. We’ve been involved in a number of far-reaching cases dealing with housing, evictions, informal settlements and political space. We’ve also continued to represent the 36 families of the deceased mineworkers who were brutally killed during the Marikana massacre, as well as AMCU, before the Marikana Commission of Inquiry.

At the same time we've been actively involved in furthering our research and advocacy work, and have entered into a number of exciting partnerships to ensure greater constitutional and legal literacy and engagement. These include community workshops based around the Dear Mandela documentary film, as well as eviction law workshops for government officials which we've hosted together with the South African Local Government Association (SALGA). In terms of research, last month SERI launched a research report on protest and the use of the criminal justice system to silence dissent, as well as debuted a new research output called Community Practice Notes. The first series of Community Practice Notes published this year focuses on informal settlements and we're currently working on a second series that will focus on Johannesburg inner city.

Message of condolence from SERI on the passing of Gerald Kraak (20 October 2014).

With profound sadness, SERI marks the untimely death of Gerald Kraak, former programme executive at the South African office of The Atlantic Philanthropies. Gerald was a fine scholar, a level-headed philanthropist and a deeply compassionate and supportive man. He played a crucial role in SERI’s foundation.

We will always remember Gerald's rock-solid support, his careful and wise counsel and his wicked sense of humour. He will be sorely missed.

On Saturday 18 October 2014, SERI partnered with the Centre for Urbanism and Built Environment Studies (CUBES) at the University of Witwatersrand to host a workshop on tenants' rights and the law related to rental housing in South Africa.

The workshop was based on two user-friendly, plain-language resource guides published last year in partnership with CUBES. The first, A Tenant's Guide to Rental Housing, is meant to help tenants understand their rights. It is structured in three sections which cover the start, duration and end of the landlord-tenant relationship. In each of these sections there are a number of questions which tenants have often asked SERI or CUBES when they have come to us for support. The answers provided are meant to assist tenants to protect themselves against unfair and illegal conduct by landlords and to understand when the law says that a tenant is acting unfairly and illegally. The second guide, Rental Housing in South Africa: Legislation, Regulations and Case Law, contains the laws and regulations on landlord-tenant relations and rental housing in South Africa. It includes the Rental Housing Act 50 of 1999 and the Gauteng Unfair Practices Regulations, 2001, which are printed in full together with some guidelines to help readers navigate the content.

The workshop was attended by over 30 tenants from Yeoville and Rosettenville, two areas in Johannesburg where tenants are particularly vulnerable. The participants were shown how to navigate the guides in order to address the rental housing issues they face or have faced in the past. Many participants stated that the guide was useful to understanding the legal obligations inherent in rental relationships in South Africa and to accessing further assistance from institutions when confronted with rental issues. 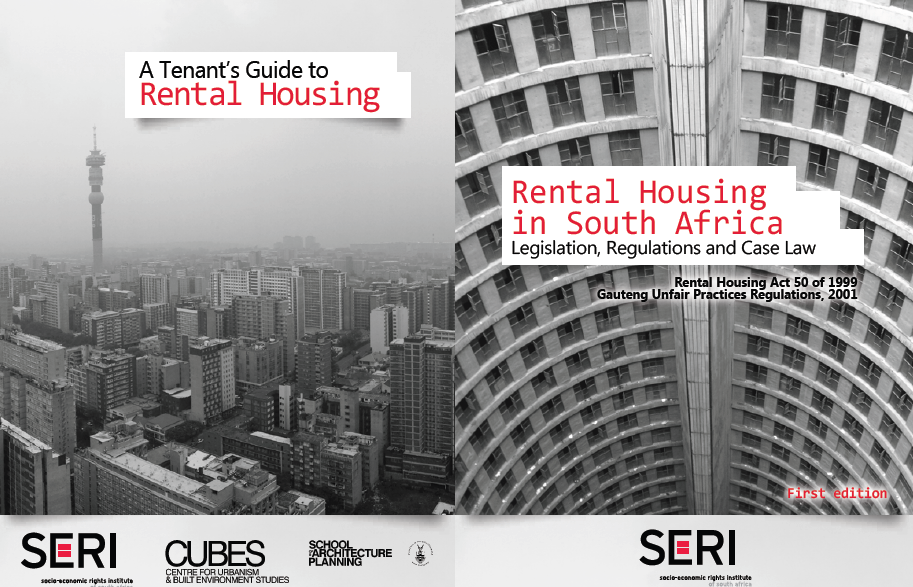 On 14 October 2014 a Full Bench of the South Gauteng High Court handed down judgment in ABSA Bank v Lekuku. SERI was invited by the court to make a submission as amicus curiae in the case, in which the main issue is whether a requirement in the Gauteng Local Division Practice Manual, that personal service of foreclosure applications against property that might be used as a home be attempted and required where possible, is lawful.

The case forms part of SERI's ongoing work to prevent banks and other lending institutions from abusing court processes dealing with debt collection.

SERI argued that the practice directive does not require that personal service must be effected in all cases, only where it is possible. And that personal service is the preferred method of service because of the risk of the debtor losing their house, and the importance of them being at court in case they can persuade the judge not to declare it executable.

This is against the background of foreclosures being granted in the past in cases where the summons was left under stone outside a property or attached to a gate. ABSA had relied on so-called "domicilium" clauses in bond agreements to argue that service under a stone or by attachment to the outside gate of an address nominated in a bond was sufficient, even if the summons does not come to the attention of a consumer

The effect of the recent judgment is that banks in the Gauteng Local Division must now make “every reasonable effort” to draw foreclosure proceedings to a debtor’s attention, including by personal service where possible.

On 9 October 2014, SERI filed papers opposing an eviction application brought by a private owner, All Building and Cleaning Services CC, which is a property development company. The company is seeking to evict two elderly occupiers living on a property in Fairlands in Johannesburg. The occupiers include two 71 year-old individuals who had worked for the previous owner of the property and lived on the property for 44 years. The occupiers earn very little and are at risk of becoming homeless if evicted. The property owner is requesting the eviction in order to redevelop the property for higher-income persons.

The eviction application comes in the wake of an attempted illegal eviction which took place on Freedom Day last year on 27 April 2013. On that day, a group of men descended onto the property and attempted to remove the roof of the occupiers’ home.