SERI's first newsletter of 2015 is out! The April 2015 edition is filled with information and updates on our research, advocacy and litigation work over the past few months.

In April 2015 the families of the deceased and AMCU filed heads of argument in Legal Aid SA's application to the Constitutional Court for leave to appeal the decision of the SCA in the Magidiwana case. This decision was handed down in September 2014. The families and AMCU oppose the application for leave to appeal, arguing that the determination of the appeal would have no practical effect (Legal Aid SA had promised to fund the miners’ representation whether or not it won), and it is accordingly not in the interests of justice to grant the application.

The Magidiwana case was brought by the injured and arrested miners in 2013 to compel Legal Aid SA to fund the legal representation of the miners before the Marikana Commission. The families of the deceased and AMCU supported the application from the beginning.

The appeal has been set down for hearing in the Constitutional Court on 14 May 2015.

In March 2015 the residents of the Slovo Park informal settlement filed their replying affidavit in response to the City of Johannesburg's affidavit in the Melani case. The City is arguing that it has made a policy decision to relocate Slovo Park residents to Unaville housing development (ostensibly to be built in Lenasia South), and that the court cannot interfere with this decision. This is in response to an application launched in January 2014 by the residents, seeking the court to review the City's failure to take the decision to apply to the Gauteng Provincial Government for funding to upgrade Slovo Park in terms of the Upgrading of Informal Settlements Programme (UISP) contained in the National Housing Code.

In the latest papers filed in the case, the residents argue that the City’s plan for their relocation to Unaville is in clear breach of the applicable legal framework and that, as a first priority, the UISP requires that informal settlements must be upgraded in situ and in partnership with the residents of the relevant informal settlement. The City’s new plan to accommodate the applicants at Unaville ignores both requirements and the City does not furnish any evidence that any consideration of the requirements of the UISP was undertaken.

On Sunday 22 March 2015 SERI held an Inner City Workshop for committee members from a number of buildings where we represent the residents. 39 people attended the workshop from 14 inner city buildings, including: MBV 1, 54 Soper Road, Ekuthuleni, Jeanwell Court and Koch Mansions.

The aim of the workshop was to share experiences across the different buildings and discuss a collective way forward on issues of evictions and affordable rental housing in the inner city. A follow-up workshop is planned soon. 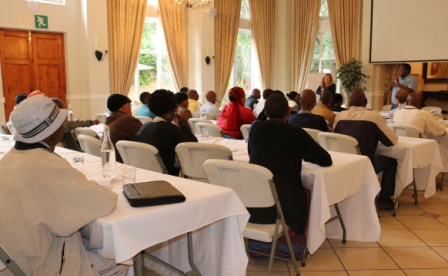 Today, the SCA confirmed that municipal officials can face contempt of court proceedings if they fail to ensure that municipalities obey court orders. The SCA was ruling on an appeal by the City of Johannesburg against an order of the Johannesburg High Court made in April 2013 in the Hlophe case. That order directed Mayor Parks Tau, City Manager Trevor Fowler and former City of Johannesburg Director of Housing Thabo Maisela, to take all the steps necessary to provide 180 poor residents with alternative accommodation, failing which they could be sued for contempt. This case was brought to court by the residents of Chung Hua Mansions in Jeppe Street, Johannesburg, after the City missed several court-ordered deadlines to provide the residents with decent shelter.

Acting Judge of Appeal CHG van der Merwe, writing for a unanimous court, held that the fundamental constitutional value of accountability requires municipal officials to see to it that the municipalities they control obey court orders. Judge van der Merwe held that public accountability “is a founding value of the Constitution and central to our Constitutional culture”. In promoting accountability, courts can make a variety of orders, including orders that individual officials discharge their obligations to provide housing for the poor.

Nomzamo Zondo, SERI director of litigation, said: “Today the SCA held that we have the right to expect our public officials to do their jobs diligently, and without delay. The City has repeatedly failed to provide SERI’s clients with decent accommodation, and has left them in appalling conditions in a high-rise inner city building. This is not acceptable. I will be meeting with the City in the next few days to ensure that the residents are promptly given accommodation.”

The residents of Chung Hua Mansions were represented in the appeal by Paul Kennedy SC, and SERI executive director Stuart Wilson.