Between 24 and 29 May 2015 SERI researcher Dennis Webster will be in Sao Paulo, Brazil attending the 14th International Human Rights Colloquium hosted and organised by Conectas together with the LRC (South Africa), the Center for Legal and Social Studies (CELS) (Argentina) and KontraS (Indonesia). The theme of this year's Colloquium is "Human Rights and the Street". Its primary objective is to promote integration between human rights organizations and activists from the Global South, 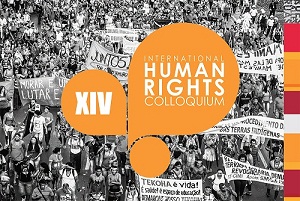 [Litigation] Zulu case to be argued today and tomorrow in Durban High Court (21 May 2015).

An interim interdict granted on 28 March 2013 permits and obliges the eThekwini municipality to “prevent any persons from invading and/or occupying and/or undertaking the construction of any structures” on specified land within the municipality’s area of jurisdiction and to “remove any materials placed by any persons upon” that land. It is this order that was used to justify the Cato Crest evictions in 2013. Abahlali has thousands of members with an interest in any case dealing with the validity of the MEC's order.

Abahlali and the residents argue that the interdict granted is a nullity because the order was granted against a party which had not been joined or served, and was in breach of the applicable statute. Further, the residents argue that the interdict purports to authorise the eviction of thousands of people living on 1 568 properties throughout the municipality without the occupiers of these properties having been joined to, or given notice of, the proceedings that led to it being granted, and without compliance with section 26(3) of the Constitution or the PIE Act. The municipality claims that the evictions it carried out against the Cato Crest residents between 13 August and 15 September 2013 were lawful because they were carried out in compliance with the interim interdict; however because it was a nullity it follows that the evictions carried out in terms of it were unlawful.

On 16 and 17 May SERI and Abahlali baseMjondolo (AbM) hosted a paralegal workshop with community activists based in and around Durban. The workshop covered a broad range of legal topics including defending against lawful evictions, resisting unlawful evictions, identifying the unlawful use of court interdicts as eviction orders, and the criminalization of public protest.

The workshop was presented by SERI staff members Bhavna Ramji and Mbekezeli Benjamin, and was based on the recently launched Dear Mandela Toolkit. 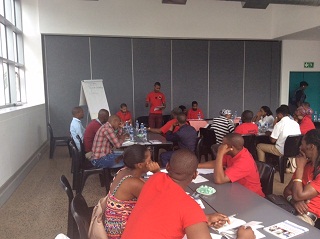 Arguments will be heard today in the Constitutional Court in the Magidiwana case. The case was initially brought in 2013 by the injured and arrested miners to compel Legal Aid SA to fund the legal representation of the miners before the Marikana Commission of Inquiry. The families of the deceased and the Association of Mineworkers and Construction Union (AMCU) supported the application from the beginning. SERI represents both the families of 36 of the deceased miners killed at Marikana, as well as AMCU.

On 26 September 2014, the Supreme Court of Appeal (SCA) dismissed Legal Aid SA’s appeal of a North Gauteng High Court ruling that ordered it to fund the arrested and injured miners' legal representation. In October 2014, Legal Aid SA filed an affidavit in its application for leave to appeal the SCA decision to the Constitutional Court. In April the families and AMCU filed their heads of argument. They oppose the application for leave to appeal because the determination of the appeal would have no practical effect, and it is accordingly not in the interests of justice to grant the application.

On 7 May 2015 the Constitutional Court handed down a unanimous judgment in the Pheko enforcement case, endorsing SERI's submission as amicus curiae and joining the Executive Mayor, Municipal Manager, Ekurhuleni Head of Department for Human Settlements and the Gauteng MEC for Human Settlements to the proceedings for the purpose of implementing the supervisory order. This ruling means that officials of Ekurhuleni Metropolitan Municipality and the Gauteng Department of Human Settlements can be held individually responsible for implementing the court's order.