Last week the Durban High Court struck down a temporary court order that had been used by the municipality to illegally evict people living in informal settlements in the city.

SERI acted for Abahlali baseMjondolo and residents of the Cato Crest informal settlement in the matter.

The judgment has national implications, and sends a clear message to municipalities and owners seeking similar interdicts that they too are subject to the requirements of the PIE Act, and the Constitution.

The residents and Abahlali recognise that no victory will ever be complete without land, housing, and dignity. However this judgment represents a significant step towards achieving a more just dispensation for people who feel the burden of inequality most in South Africa.

Today Judge Mokgohloa, sitting in the Durban High Court handed down judgment in MEC for Human Settlements, KwaZulu Natal v. eThekwini Municipality and Others. The Judge struck down a temporary court order that had been used by the MEC and the Durban Municipality to evict thousands of poor people from informal settlements in Durban.

The court confirmed that evictions are governed by the Prevention of Illegal Eviction from and Unlawful Occupation of Land Act (PIE) and section 26 (3) of the Constitution. The process prescribed by those instruments must be followed before the eviction of unlawful occupiers is undertaken. PIE and the Constitution are intended to respect the dignity of the poor, and ensure that alternative accommodation is provided where needed. The interim order granted to the MEC was not sought or granted under PIE, nor could it be, because it allowed for people to be evicted without court oversight and without notice.

The High Court’s judgment comes at a time when municipalities and land owners are relying more and more on urgent court proceedings to facilitate evictions of informal settlers and destroy their property without having to justify their actions to a court. The judgment has national implications, and sends a clear message to municipalities and owners seeking similar interdicts that they too are subject to the requirements of the PIE Act, and the Constitution. It represents a significant step towards achieving a more just dispensation for people who feel the burden of inequality most in South Africa.

Nomzamo Zondo, Director of Litigation at SERI said “The order the MEC sought to confirm would have resulted in many thousands of people being made homeless. Our Constitution demands that people who are driven to occupy open land because they have nowhere else to go must be treated with dignity and respect. They must be given help to live in peace and dignity, not cast out onto the street. Judge Mokgohloa’s judgment is welcome re-affirmation of this.”

SERI has published its Biennial Review, which reviews all of our litigation, research, and advocacy during the period July 2013 - June 2015.

In the last two years, SERI has continued to amplify the voices of communities and movements working for a more just distribution of power and resources, while at the same time achieving real and measurable change on the ground for many thousands of people. 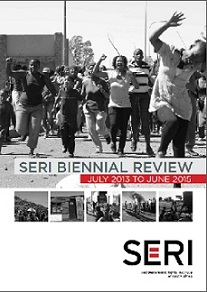 SERI is delighted to welcome Josh Budlender as a research fellow.

Josh has a BSocSci (with majors in Economics and Economic History) and an Honours degree in Economics from the University of Cape Town (UCT). His honours thesis examined whether the wages paid by UCT to its outsourced workers could be considered a living wage. Prior to joining SERI, Josh worked as a researcher at the Southern African Labour and Development Research Unit (SALDRU), based at UCT.  Previously he worked at SERI as a research intern.

Today SERI's Naadira Munshi discussed the third commemoration of the Marikana massacre, as well as the civil claims filed by the families against the South African government, on SABC Newsroom.