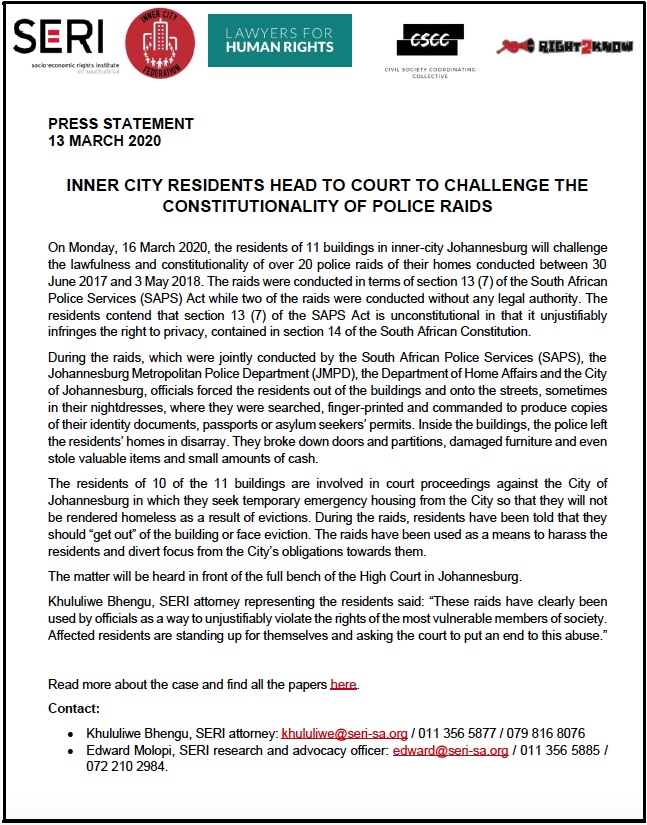 On Monday, 16 March 2020, the residents of 11 buildings in inner-city Johannesburg will challenge the lawfulness and constitutionality of over 20 police raids of their homes conducted between 30 June 2017 and 3 May 2018. The raids were conducted in terms of section 13 (7) of the South African Police Services (SAPS) Act while two of the raids were conducted without any legal authority. The residents contend that section 13 (7) of the SAPS Act is unconstitutional in that it unjustifiably infringes the right to privacy, contained in section 14 of the South African Constitution.

During the raids, which were jointly conducted by the South African Police Services (SAPS), the Johannesburg Metropolitan Police Department (JMPD), the Department of Home Affairs and the City of Johannesburg, officials forced the residents out of the buildings and onto the streets, sometimes in their nightdresses, where they were searched, finger-printed and commanded to produce copies of their identity documents, passports or asylum seekers’ permits. Inside the buildings, the police left the residents’ homes in disarray. They broke down doors and partitions, damaged furniture and even stole valuable items and small amounts of cash.

The residents of 10 of the 11 buildings are involved in court proceedings against the City of Johannesburg in which they seek temporary emergency housing from the City so that they will not be rendered homeless as a result of evictions. During the raids, residents have been told that they should “get out” of the building or face eviction. The raids have been used as a means to harass the residents and divert focus from the City’s obligations towards them.

The matter will be heard in front of the full bench of the High Court in Johannesburg.

Khululiwe Bhengu, SERI attorney representing the residents said: “These raids have clearly been used by officials as a way to unjustifiably violate the rights of the most vulnerable members of society. Affected residents are standing up for themselves and asking the court to put an end to this abuse.” The arbitration will be conducted by a three-member panel which must be appointed by 15 April 2020 who will determine the purchase price of the properties in accordance with section 12 of the Expropriation Act 63 of 1975 read with section 25(3) of the Constitution.

Section 25(3) of the Constitution states: “The amount of the compensation and the time and manner of payment must be just and equitable, reflecting an equitable balance between the public interest and the interests of those affected, having regard to all relevant circumstances, including—

(a) the current use of the property;

(b) the history of the acquisition and use of the property;

(c) the market value of the property;

(d) the extent of direct state investment and subsidy in the acquisition and beneficial capital improvement of the property; and

(e) the purpose of the expropriation.”

The order specifies that the decision of the arbitrators is not subject to appeal.

The parties reached a settlement agreement in lieu of litigating Fischer v Unlawful Occupiers and Manfred Stock & Others v Unlawful Occupiers, on appeal to the SCA from the Western Cape High Court. In 2017, the High Court dismissed the application to evict 60 000 residents of Marikana informal settlement, finding that the City of Cape Town had infringed the land owners’ property rights and breached the housing rights of the Marikana residents by failing to secure their tenure. The Court directed the City to initiate the process provided for in terms of section 9(3) of the Housing Act, by entering into good faith negotiations to purchase the Marikana land and expropriating the land in the event that purchase negotiations failed. 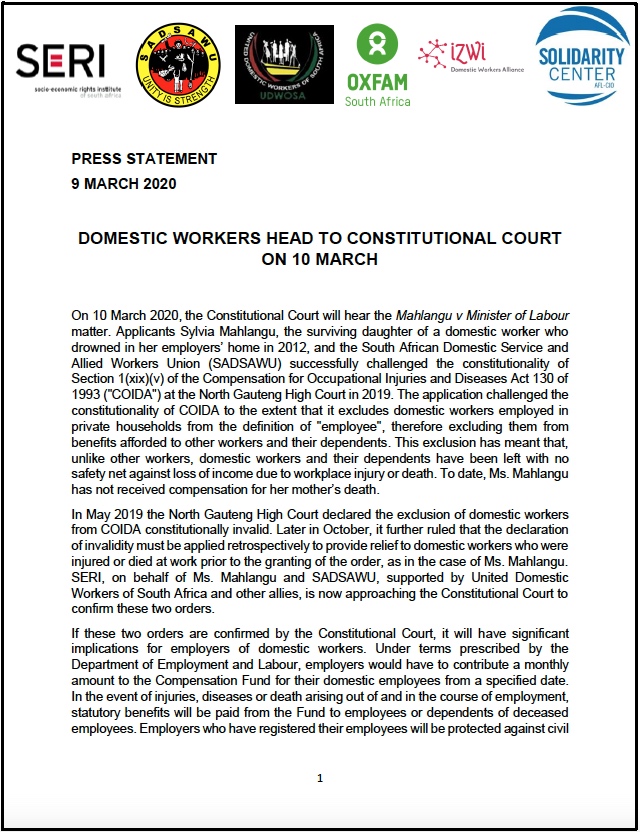 On 10 March 2020, the Constitutional Court will hear the Mahlangu v Minister of Labour matter. Applicants Sylvia Mahlangu, the surviving daughter of a domestic worker who drowned in her employers’ home in 2012, and the South African Domestic Service and Allied Workers Union (SADSAWU) successfully challenged the constitutionality of Section 1(xix)(v) of the Compensation for Occupational Injuries and Diseases Act 130 of 1993 ("COIDA") at the North Gauteng High Court in 2019. The application challenged the constitutionality of COIDA to the extent that it excludes domestic workers employed in private households from the definition of "employee", therefore excluding them from benefits afforded to other workers and their dependents. This exclusion has meant that, unlike other workers, domestic workers and their dependents have been left with no safety net against loss of income due to workplace injury or death. To date, Ms. Mahlangu has not received compensation for her mother’s death.

In May 2019 the North Gauteng High Court declared the exclusion of domestic workers from COIDA constitutionally invalid. Later in October, it further ruled that the declaration of invalidity must be applied retrospectively to provide relief to domestic workers who were injured or died at work prior to the granting of the order, as in the case of Ms. Mahlangu. SERI, on behalf of Ms. Mahlangu and SADSAWU, supported by United Domestic Workers of South Africa and other allies, is now approaching the Constitutional Court to confirm these two orders.

If these two orders are confirmed by the Constitutional Court, it will have significant implications for employers of domestic workers. Under terms prescribed by the Department of Employment and Labour, employers would have to contribute a monthly amount to the Compensation Fund for their domestic employees from a specified date. In the event of injuries, diseases or death arising out of and in the course of employment, statutory benefits will be paid from the Fund to employees or dependents of deceased employees. Employers who have registered their employees will be protected against civil claims; employees covered by COIDA are prevented from suing their employers for damages in terms of common law.

Domestic workers and dependants who experienced work-related injuries, diseases or death prior to the confirmation of the two orders, will be able to submit claims to the Compensation Fund even though their employers were precluded from contributing to the Fund.

It is our hope that this important issue reaching the highest court in South Africa, signals a turning point for enforcement of domestic worker laws and policies. To further the gains made this far we encourage the Department of Employment and Labour to:

>> Find out more about the case here.

This special edition includes reflections from SERI's clients, partners, and staff from over the past 10 years and details SERI's research, litigation, and advocacy work over the period in our thematic areas of Securing a Home, Making a Living, and Expanding Political Space.
The review is available here. 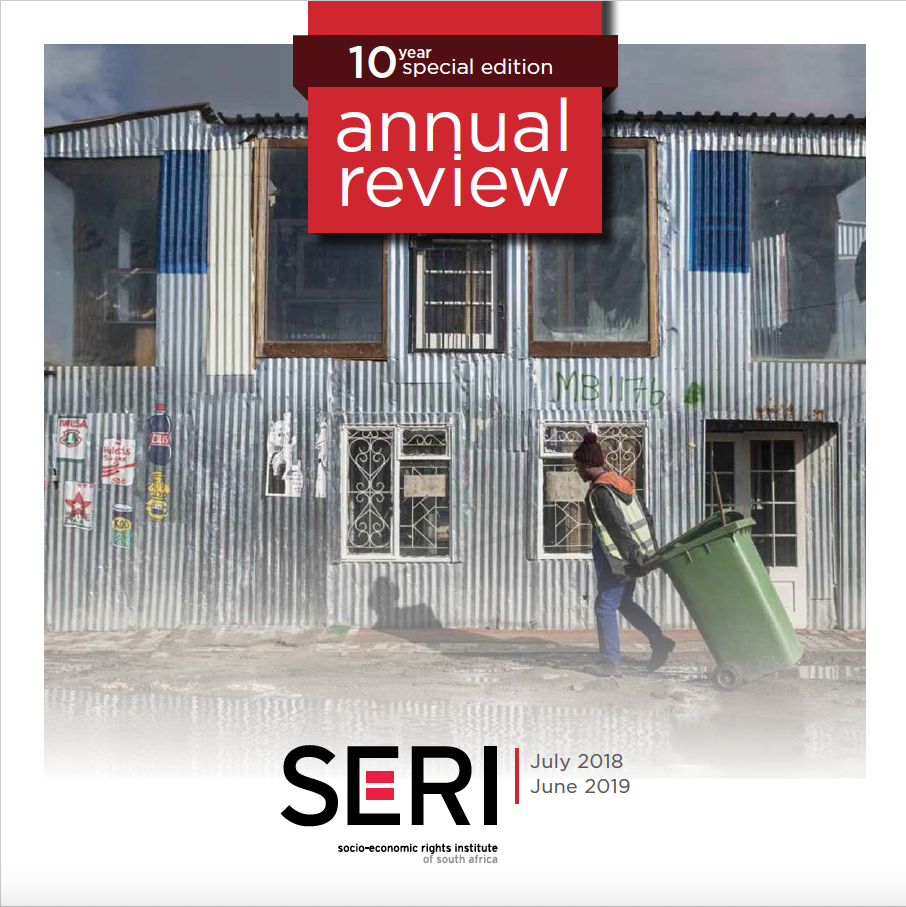 [ADVOCACY] SERI co-hosts workshop on migration and the right to work in South Africa (4 March 2020).

On Thursday 27 February 2020, a workshop on “Migration, the Right to Work and Evidence” was held in Mowbray, Cape Town. The workshop was co-hosted by the African Centre for Cities, the London School of Economics and Political Science, and the Socio-Economic Rights Institute (SERI).

Although South Africa’s approach to incorporating immigrants within the fabric of urban life has been lauded as progressive, there have been periodic outbursts of violence against immigrants since 1994, particularly against those working in the informal economy. This is despite substantial evidence of the contributions made by immigrants to employment generation and the economy. The purpose of the workshop was to bring together in conversation migrants, activists, lawyers and academics who are working on migration issues and to strengthen networks. The workshop was attended by 27 participants.

The workshop consisted of three sessions. In the first session, immigrant workers shared their experiences of making a living in South Africa. First, Sylvia Lum, an entrepreneur from Cameroon, detailed the obstacles she faced as an immigrant woman trying to register a business in Cape Town. Abdikadir Mohammed, a member of the Somali Association of South Africa, then shared the challenges the Somali community in South Africa experience and described xenophobic violence against Somali business owners as the biggest challenge. Lastly, Maggie Mthombeni of Izwi Domestic Workers Alliance, told stories of immigrant domestic workers and their experiences at the hands of employers who deliberately used their workers’ precarious status to exploit them. 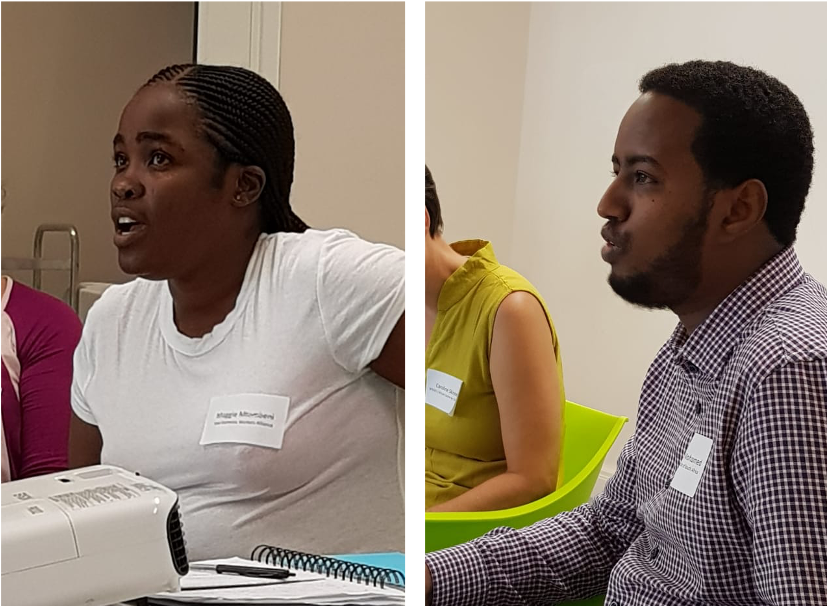 The second session was titled, “Migrants’ right to work” and began with Sally Gandar from Scalabrini Centre speaking about the recently amended Refugee Act, new regulations introduced in January 2020 and how they affect migrants’ right to work. Sharon Ekambaram, from Lawyers for Human Rights, followed and spoke about the organisations’ efforts to build solidarity between South Africans and immigrants at the community level. Timothy Fish Hodgson of the International Commission of Jurists then ended the session with a presentation on migrants’ right to work in South Africa in terms of international human rights law.

In the third session titled, “Deploying evidence to secure the right to work”, Tanya Zack from University of the Witwatersrand and Suzanne Hall from London School of Economics, both shared their research on immigrants and informal work in Johannesburg and the UK respectively and shared lessons learned on deploying evidence to help secure immigrants’ right to work. All three sessions were followed by lively group discussions.

In 2018 SERI and South African Local Government Association (SALGA) developed two publications that dispel persistent myths associated with informal trade in South Africa and clarify, often misunderstood, legal and constitutional obligation of local government in relation to informal trade. In “Informal Trade in South Africa: Legislation, Case Law and Recommendations for Local Government” the widely held myth that refugees and asylum seekers do not have the right to work in South Africa is discussed in one of the chapters. The Supreme Court of Appeal dispelled this myth in Somali Association of South Africa v Limpopo Department of Economic Development, Environment and Tourism, by stating that the constitutional right to human dignity requires that refugees and asylum seekers should be able to earn an income, irrespective of whether such employment is “wage-earning employment” or “self-employment” as in the case of informal trade.