[PRESS STATEMENT] SERI stands in solidarity with Abahlali baseMjondolo and condemns the abuse of the criminal justice system (17 May 2021). 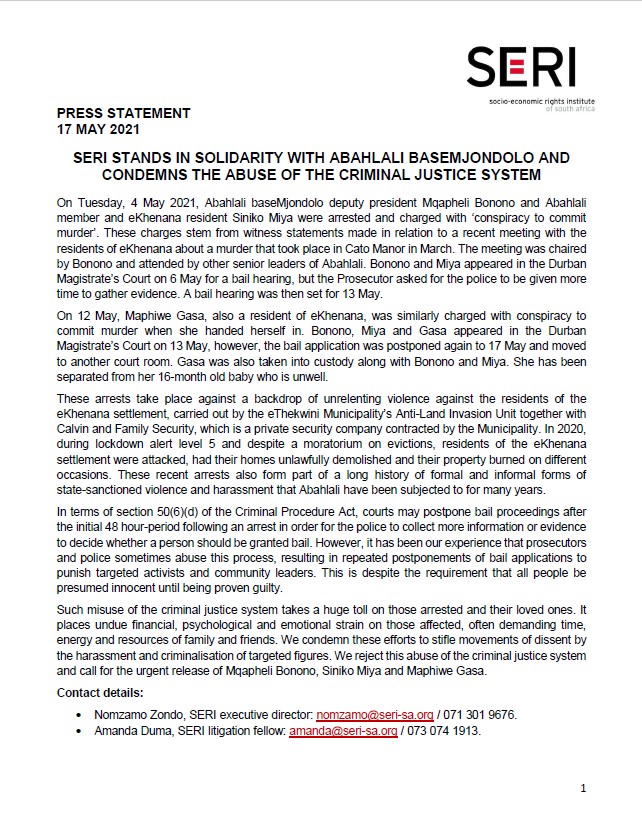 On Tuesday, 4 May 2021, Abahlali baseMjondolo deputy president Mqapheli Bonono and Abahlali member and eKhenana resident Siniko Miya were arrested and charged with ‘conspiracy to commit murder’. These charges stem from witness statements made in relation to a recent meeting with the residents of eKhenana about a murder that took place in Cato Manor in March. The meeting was chaired by Bonono and attended by other senior leaders of Abahlali. Bonono and Miya appeared in the Durban Magistrate’s Court on 6 May for a bail hearing, but the Prosecutor asked for the police to be given more time to gather evidence. A bail hearing was then set for 13 May.

On 12 May, Maphiwe Gasela, also a resident of eKhenana, was similarly charged with conspiracy to commit murder when she handed herself in. Bonono, Miya and Gasela appeared in the Durban Magistrate’s Court on 13 May, however, the bail application was postponed again to 17 May and moved to another court room. Gasela was also taken into custody along with Bonono and Miya. She has been separated from her 16-month old baby who is unwell.

These arrests take place against a backdrop of unrelenting violence against the residents of the eKhenana settlement, carried out by the eThekwini Municipality’s Anti-Land Invasion Unit together with Calvin and Family Security, which is a private security company contracted by the Municipality. In 2020, during lockdown alert level 5 and despite a moratorium on evictions, residents of the eKhenana settlement were attacked, had their homes unlawfully demolished and their property burned on different occasions. These recent arrests also form part of a long history of formal and informal forms of state‑sanctioned violence and harassment that Abahlali have been subjected to for many years.

In terms of section 50(6)(d) of the Criminal Procedure Act, courts may postpone bail proceedings after the initial 48 hour-period following an arrest in order for the police to collect more information or evidence to decide whether a person should be granted bail. However, it has been our experience that prosecutors and police sometimes abuse this process, resulting in repeated postponements of bail applications to punish targeted activists and community leaders. This is despite the requirement that all people be presumed innocent until being proven guilty.

Such misuse of the criminal justice system takes a huge toll on those arrested and their loved ones. It places undue financial, psychological and emotional strain on those affected, often demanding time, energy and resources of family and friends. We condemn these efforts to stifle movements of dissent by the harassment and criminalisation of targeted figures. We reject this abuse of the criminal justice system and call for the urgent release of Mqapheli Bonono, Siniko Miya and Maphiwe Gasela.