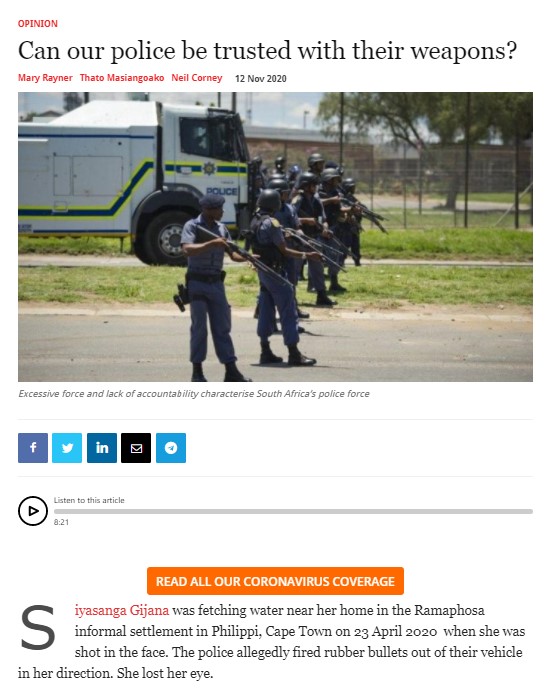 They argue that "there is an urgent need to address these issues and to review the “less-lethal weapons” upon which public order police rely. These include the double-ball rounds, fired by 12-gauge pump-action shotguns, which are indiscriminate and inaccurate, and should be prohibited."

From incidents during and prior to the COVID-19 lockdown, there have been numerous incidents that have illustrated the inherent risks from the use of rubber bullets including the fatal shooting of Andries Tatane in 2011 and concerning injuries sustained from incidents of excessive uses of force against student protestors at the University of the Witwatersrand in 2016, where the police fired 2 624 rubber bullets.  Cases documented in the Socio-Economic Rights Institute’s (SERI) A Double Harm report show that the police caused serious injuries when they fired rubber bullets at “close” or “contact-range”, at unarmed students, humanitarian workers and fleeing protestors who posed no threat at the time.

They add that "the United Nations Office of the High Commissioner for Human Rights (OHCHR) confirmed that many kinetic impact projectiles (KIPs), such as rubber bullets discharged from shotguns, are inaccurate and indiscriminate, particularly when multiple projectiles are fired simultaneously from the same weapon or when they are fired towards the ground because there is no control over the direction of the bullets fired... thereby putting unintended targets at risk whenever this weapon is fired."