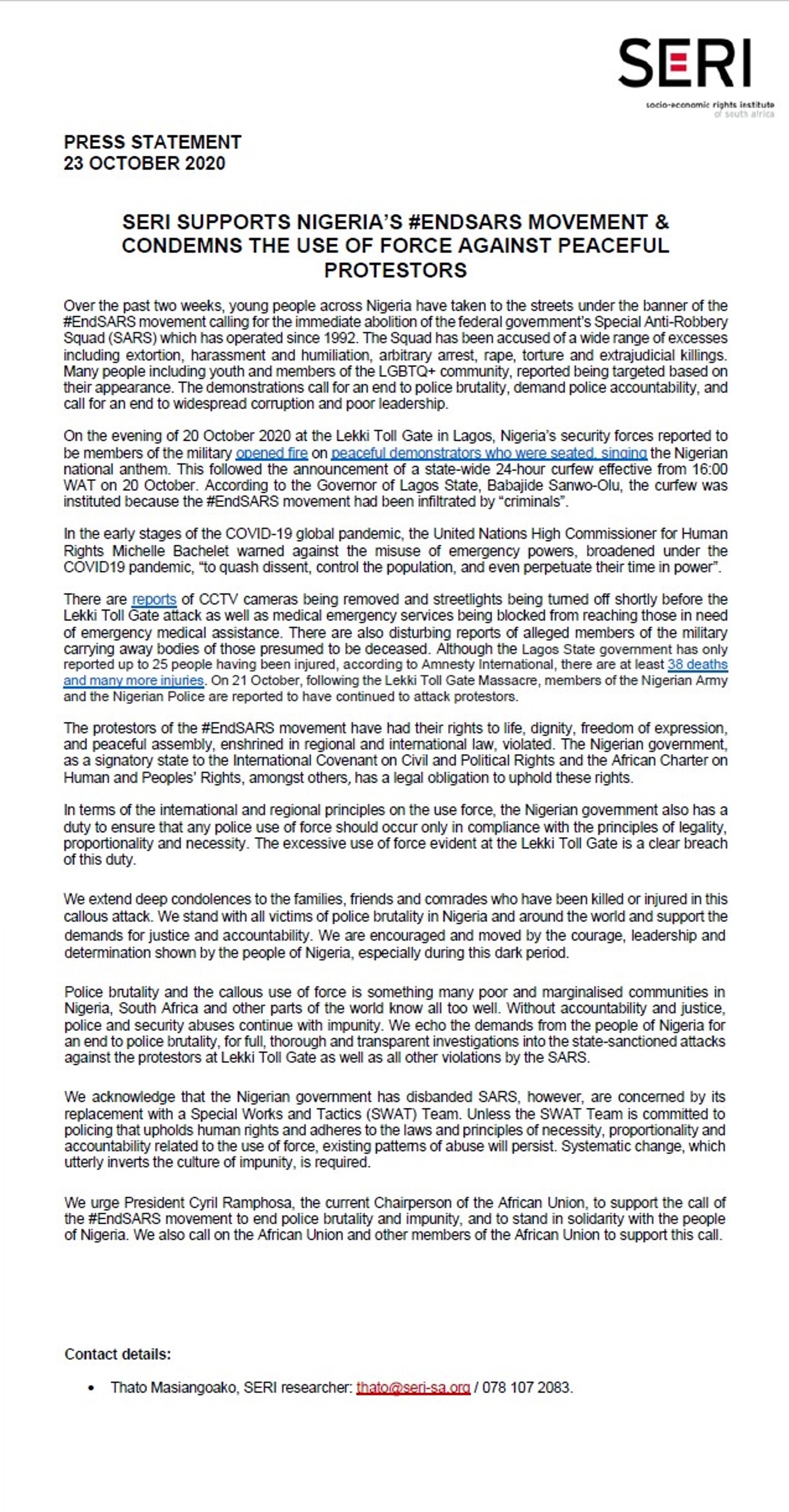 Over the past two weeks, young people across Nigeria have taken to the streets under the banner of the #EndSARS movement calling for the immediate abolition of the federal government’s Special Anti-Robbery Squad (SARS) which has operated since 1992. The Squad has been accused of a wide range of excesses including extortion, harassment and humiliation, arbitrary arrest, rape, torture and extrajudicial killings. Many people including youth and members of the LGBTQ+ community, reported being targeted based on their appearance. The demonstrations call for an end to police brutality, demand police accountability, and call for an end to widespread corruption and poor leadership.

On the evening of 20 October 2020 at the Lekki Toll Gate in Lagos, Nigeria’s security forces reported to be members of the military opened fire on peaceful demonstrators who were seated, singing the Nigerian national anthem. This followed the announcement of a state-wide 24-hour curfew effective from 16:00 WAT on 20 October. According to the Governor of Lagos State, Babajide Sanwo-Olu, the curfew was instituted because the #EndSARS movement had been infiltrated by “criminals”.

In the early stages of the COVID-19 global pandemic, the United Nations High Commissioner for Human Rights Michelle Bachelet warned against the misuse of emergency powers, broadened under the COVID19 pandemic, “to quash dissent, control the population, and even perpetuate their time in power”.

There are reports of CCTV cameras being removed and streetlights being turned off shortly before the Lekki Toll Gate attack as well as medical emergency services being blocked from reaching those in need of emergency medical assistance. There are also disturbing reports of alleged members of the military carrying away bodies of those presumed to be deceased. Although the Lagos State government has only reported up to 25 people having been injured, according to Amnesty International, there are at least 38 deaths and many more injuries. On 21 October, following the Lekki Toll Gate Massacre, members of the Nigerian Army and the Nigerian Police are reported to have continued to attack protestors.

The protestors of the #EndSARS movement have had their rights to life, dignity, freedom of expression, and peaceful assembly, enshrined in regional and international law, violated. The Nigerian government, as a signatory state to the International Covenant on Civil and Political Rights and the African Charter on Human and Peoples’ Rights, amongst others, has a legal obligation to uphold these rights.

In terms of the international and regional principles on the use force, the Nigerian government also has a duty to ensure that any police use of force should occur only in compliance with the principles of legality, proportionality and necessity. The excessive use of force evident at the Lekki Toll Gate is a clear breach of this duty.

We extend deep condolences to the families, friends and comrades who have been killed or injured in this callous attack. We stand with all victims of police brutality in Nigeria and around the world and support the demands for justice and accountability. We are encouraged and moved by the courage, leadership and determination shown by the people of Nigeria, especially during this dark period.

Police brutality and the callous use of force is something many poor and marginalised communities in Nigeria, South Africa and other parts of the world know all too well. Without accountability and justice, police and security abuses continue with impunity. We echo the demands from the people of Nigeria for an end to police brutality, for full, thorough and transparent investigations into the state-sanctioned attacks against the protestors at Lekki Toll Gate as well as all other violations by the SARS.

We acknowledge that the Nigerian government has disbanded SARS, however, are concerned by its replacement with a Special Works and Tactics (SWAT) Team. Unless the SWAT Team is committed to policing that upholds human rights and adheres to the laws and principles of necessity, proportionality and accountability related to the use of force, existing patterns of abuse will persist. Systematic change, which utterly inverts the culture of impunity, is required.