[PRESS STATEMENT] Excessive use of force by police is a failure to learn from Marikana (28 August 2020). 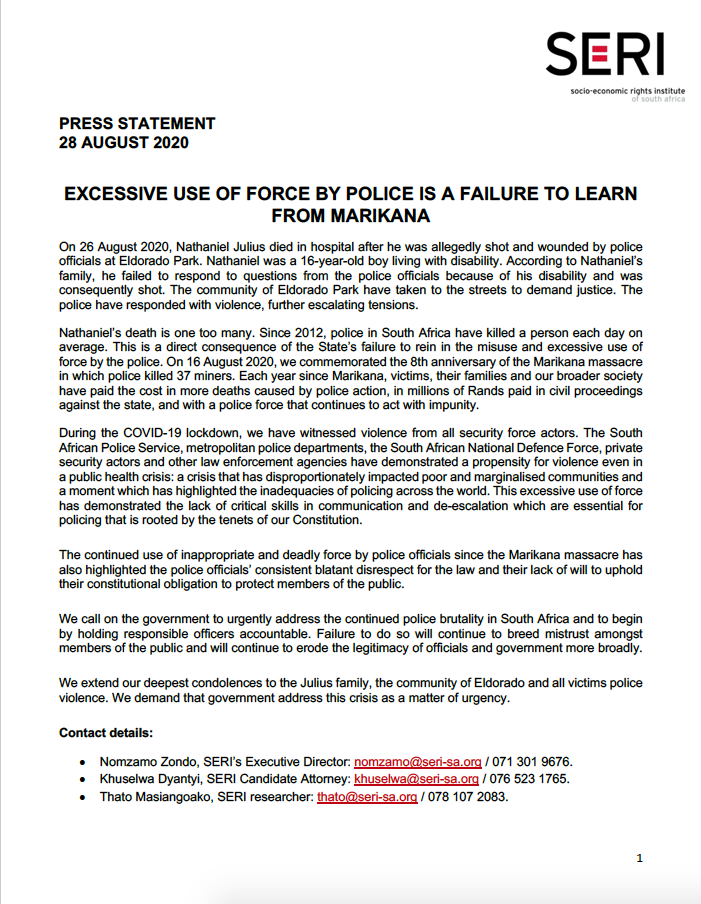 On 26 August 2020, Nathaniel Julius died in hospital after he was allegedly shot and wounded by police officials at Eldorado Park. Nathaniel was a 16-year-old boy living with disability. According to Nathaniel’s family, he failed to respond to questions from the police officials because of his disability and was consequently shot. The community of Eldorado Park have taken to the streets to demand justice. The police have responded with violence, further escalating tensions.

Nathaniel’s death is one too many. Since 2012, police in South Africa have killed a person each day on average. This is a direct consequence of the State’s failure to rein in the misuse and excessive use of force by the police. On 16 August 2020, we commemorated the 8th anniversary of the Marikana massacre in which police killed 37 miners. Each year since Marikana, victims, their families and our broader society have paid the cost in more deaths caused by police action, in millions of Rands paid in civil proceedings against the state, and with a police force that continues to act with impunity.

During the COVID-19 lockdown, we have witnessed violence from all security force actors. The South African Police Service, metropolitan police departments, the South African National Defence Force, private security actors and other law enforcement agencies have demonstrated a propensity for violence even in a public health crisis: a crisis that has disproportionately impacted poor and marginalised communities and a moment which has highlighted the inadequacies of policing across the world. This excessive use of force has demonstrated the lack of critical skills in communication and de-escalation which are essential for policing that is rooted by the tenets of our Constitution.

The continued use of inappropriate and deadly force by police officials since the Marikana massacre has also highlighted the police officials’ consistent blatant disrespect for the law and their lack of will to uphold their constitutional obligation to protect members of the public.

We call on the government to urgently address the continued police brutality in South Africa and to begin by holding responsible officers accountable. Failure to do so will continue to breed mistrust amongst members of the public and will continue to erode the legitimacy of officials and government more broadly.

We extend our deepest condolences to the Julius family, the community of Eldorado and all victims police violence. We demand that government address this crisis as a matter of urgency.