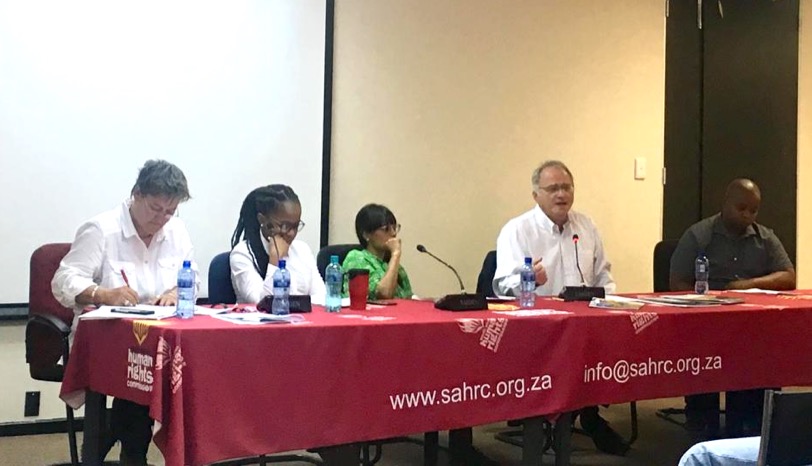 On 12 September 2019, SERI participated in the 3rd Annual Dialogue on Human Rights and Policing hosted by the African Policing Civilian Oversight Forum (APCOF) in partnership with the South African Human Rights Commission (SAHRC). The event brought together key actors and organisations in the fields of policing, government, police oversight, research, advocacy and activism to discuss critical and persistent issues related to policing and human rights in South Africa.

The dialogue comprised of four panel discussions: The first panel discussed ‘strengthening human rights compliance in places of custody’; the second panel looked at the ‘criminalisation of poverty’; the third panel unpacked issues around ‘public order policing’; and the fourth  dealt with ‘crime and policing’ in terms of the militarisation of policing and concerns around privacy and surveillance.

SERI’s director of research and advocacy, Alana Potter, facilitated the third panel discussion on public order policing. Alana introduced the panel by contextualising the issue of public order policing with the recent #AmINext protests and the heavy-handed police response that they have received as well as the wider context of growing inequality, crime, dissatisfaction and dissent combined with continued challenge of under-resourced and poorly equipped public order police.

Professor Christof Heyns (member of the United Nations Human Rights Committee), presented on the right to assemble from an international law perspective by looking at international and regional principles and standards. Zamantungwa Khumalo (SERI attorney) reflected on public order policing seven years after the Marikana Massacre and the progress SERI has made representing the families of the 34 miners who died at the hands of the police. Thandi Mathews (SAHRC attorney) discussed the potential amendment of the Regulation of Gatherings Act in light of the Mlungwana Constitutional Court judgment of 2018. Chumile Sali (APCOF project officer) shed light on some of the concerns APCOF and other civil society organisations shared about the Critical Infrastructure Protection Bill which is currently awaiting to be signed into law.

Some of the main themes and concerns to come from the discussion include the issue continued police violations of human rights in terms of their management of protests; their engagements with foreign nationals; and the treatment of other vulnerable groups such as the informal traders, sex-workers and homeless people, who often find themselves on the receiving end of unequally enforced bylaws. The uneven and irregularly enforced Regulations of Gatherings Act emerged a key area of debate particularly in light of the pending amendment of the Act. Activists reiterated their concerns with the way the Act is administered by local government officials and the police. Many argued that the Act and its notification procedure has often been used to stifle dissent. The audience robustly discussed the manner in which the Act should be amended particularly in terms of its purpose of protecting and promoting the right to protest while encouraging effective police facilitation of protest.

The Dialogue called for the Minister of Police to release of the post-Marikana Expert Panel Report on Public Order Policing, which has been pending for almost 2 years. APCOF will produce a full report on the 2019 Dialogue.