[PRESS STATEMENT] Johannesburg residents head to the Constitutional Court in their challenge to warrantless raids (24 November 2020). 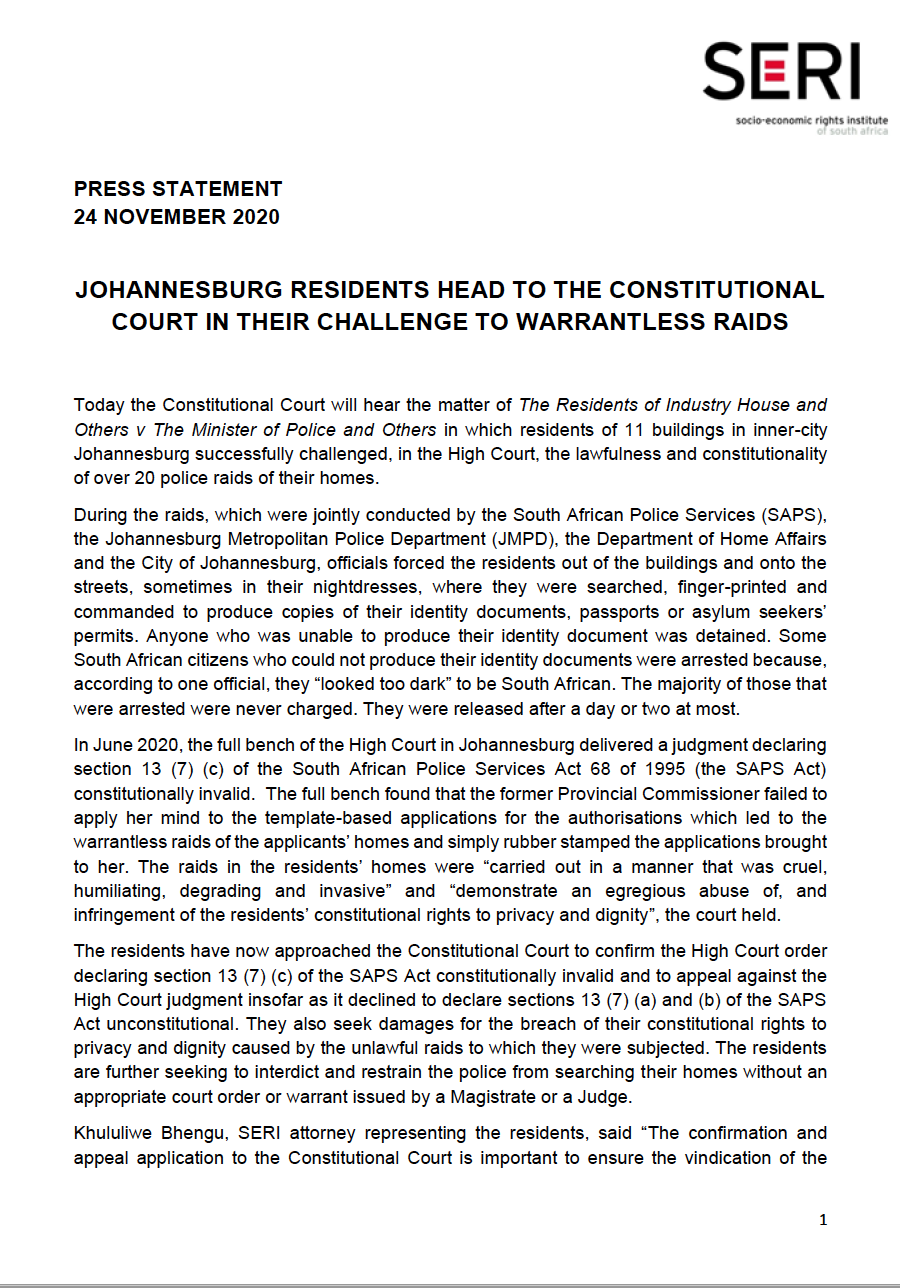 Today the Constitutional Court will hear the matter of The Residents of Industry House and Others v The Minister of Police and Others in which residents of 11 buildings in inner-city Johannesburg successfully challenged, in the High Court, the lawfulness and constitutionality of over 20 police raids of their homes.

During the raids, which were jointly conducted by the South African Police Services (SAPS), the Johannesburg Metropolitan Police Department (JMPD), the Department of Home Affairs and the City of Johannesburg, officials forced the residents out of the buildings and onto the streets, sometimes in their nightdresses, where they were searched, finger-printed and commanded to produce copies of their identity documents, passports or asylum seekers’ permits. Anyone who was unable to produce their identity document was detained. Some South African citizens who could not produce their identity documents were arrested because, according to one official, they “looked too dark” to be South African. The majority of those that were arrested were never charged. They were released after a day or two at most.

In June 2020, the full bench of the High Court in Johannesburg delivered a judgment declaring section 13 (7) (c) of the South African Police Services Act 68 of 1995 (the SAPS Act) constitutionally invalid.  The full bench found that the former Provincial Commissioner failed to apply her mind to the template-based applications for the authorisations which led to the warrantless raids of the applicants’ homes and simply rubber stamped the applications brought to her. The raids in the residents’ homes were “carried out in a manner that was cruel, humiliating, degrading and invasive” and “demonstrate an egregious abuse of, and infringement of the residents’ constitutional rights to privacy and dignity”, the court held.

The residents have now approached the Constitutional Court to confirm the High Court order declaring section 13 (7) (c) of the SAPS Act constitutionally invalid and to appeal against the High Court judgment insofar as it declined to declare sections 13 (7) (a) and (b) of the SAPS Act unconstitutional. They also seek damages for the breach of their constitutional rights to privacy and dignity caused by the unlawful raids to which they were subjected. The residents are further seeking to interdict and restrain the police from searching their homes without an appropriate court order or warrant issued by a Magistrate or a Judge.

Khululiwe Bhengu, SERI attorney representing the residents, said “The confirmation and appeal application to the Constitutional Court is important to ensure the vindication of the residents’ rights to dignity and privacy and to emphasise that as much as the sanctity of a person’s home is important, the right to privacy does not end at a person’s door step.”