August 2020 marks the 8th anniversary of the Marikana massacre. To commemorate the anniversary SERI hosted a webinar, in partnership with the Anti-repression Working Group of the C-19 People’s Coalition, to reflect on the continued lack of accountability for Marikana as well as the continuation of police brutality since the massacre. The webinar took place on 13 August - the date that the striking mineworkers experienced police violence in the days prior to the 16th of August. 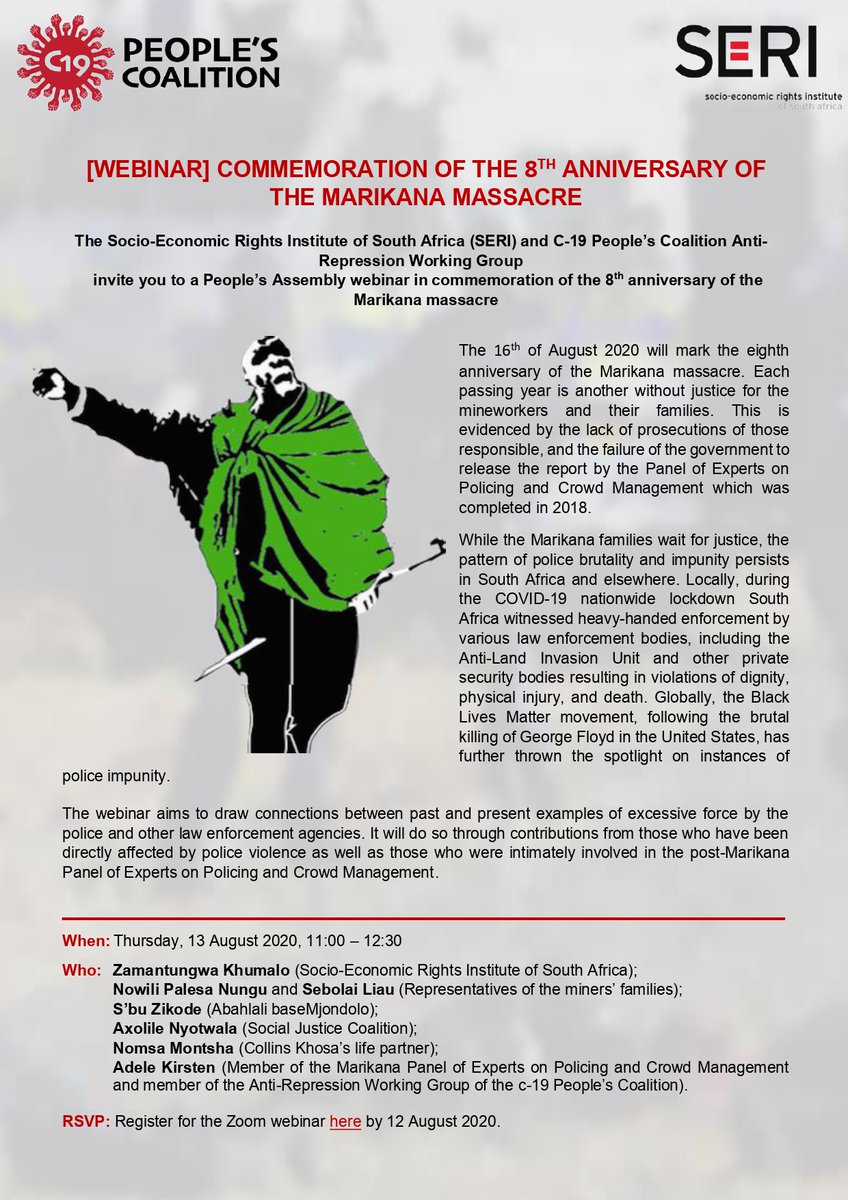 The panel included Nowili Palesa Nungu and Sebolai Liau. Nungu is the daughter of the late Jackson Lehupa and Liau is the son of the late Janeveke Raphael Liau. Mr Lehupa and Mr Liau were both killed on the 16th of August 2012. The panel also included Nomsa Montsha, the life partner of Collins Khosa.

Ms Nungu and Mr Liau shared their experiences of losing their parents at a young age and the impact that a lack of justice and recognition has had on their families. Ms Montsha discussed her struggle for justice and accountability for what happened to Mr Khosa and how that struggle has affected her ability to mourn. Mr Khosa died from injuries sustained from an assault by members of the South African National Defence Force who were accompanied by members of the Johannesburg Metropolitan Police Department. SERI's Zamantungwa Mbeki chaired the panel discussion.

Other members of the panel were S’bu Zikode, founder and president of Abahlali baseMjondolo; Axolile Nyotwala, general secretary at the Social Justice Coalition in Cape Town; and Adele Kirsten, a former member of the Marikana Panel of Experts on Policing and Crowd Management and the Anti-repression Working Group of the C-19 People’s Coalition. Mr Zikode shared Abahlali's experience of state violence in eThekwini’ since their formation in 2005. Mr Notywala reflected on the evictions he has monitored during the lockdown and the role of the Anti-Land Invasion Unit and law enforcement in Cape Town. Ms Kirsten spoke about the Minister of Police's failure to publicly release the report and reflected on some of the unlearned lessons from Marikana including the misuse of less-lethal weapons, accountability and leadership issues. 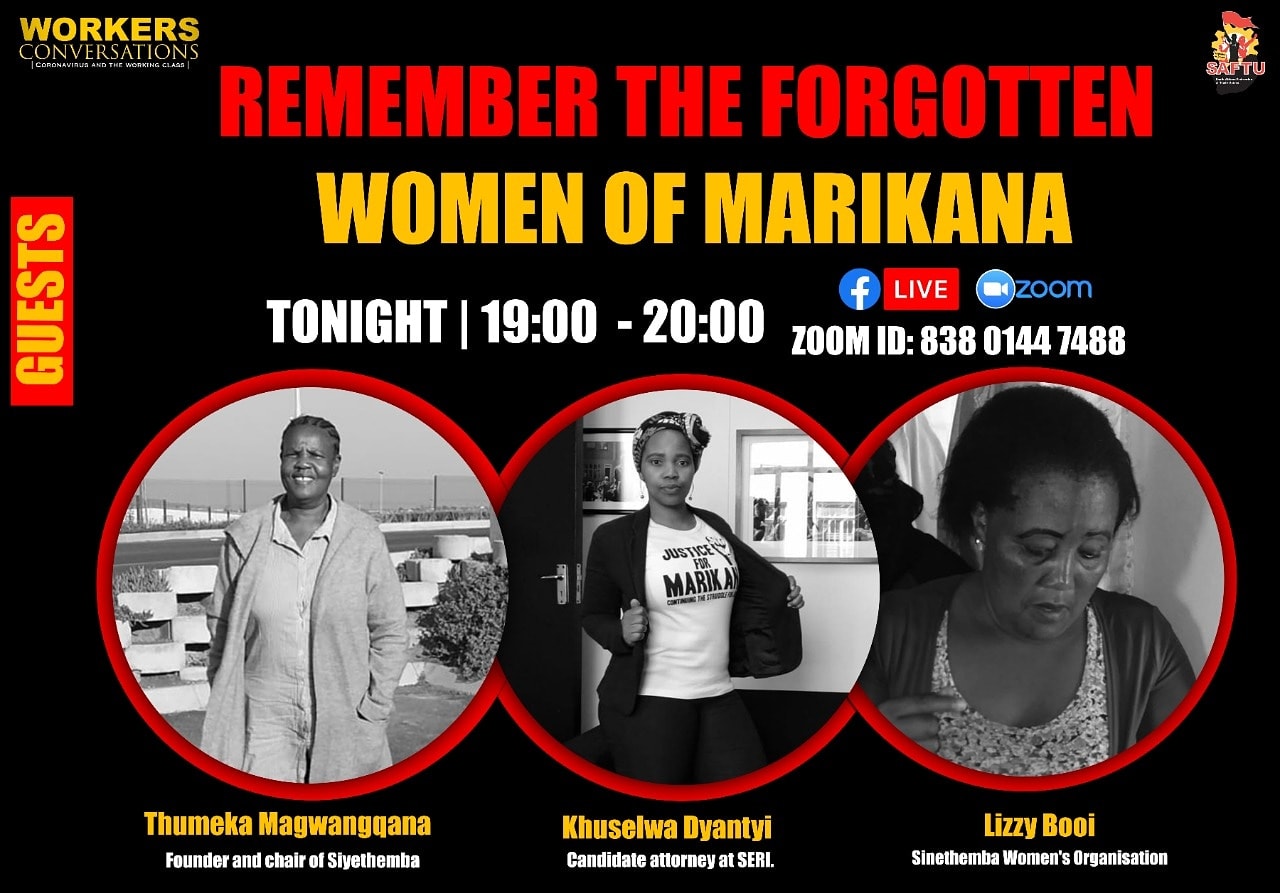 In her inputs, Dyantyi spoke about the experiences of the families of the mineworkers following the massacre and reflected on the families’ participation in the Commission of Inquiry. Dyantyi spoke specifically noted how the families were initially excluded from the process and were not given the opportunity to share how they felt. The families wanted to participate in the Commission of Inquiry because they wanted to see justice. They had travelled from places like Lesotho, the Eastern Cape, Mafikeng and other the surrounding areas in the North West in order to hear for themselves what happened to their loved ones.

Dyantyi also discussed the continued lack of accountability as well as the way forward for the families in terms of litigation. Two short documentary clips from SERI entitled "Imbokodo: The widows of Marikana" and "Bringing the truth home" were also played for the participants.

The massacre that didn't change policing 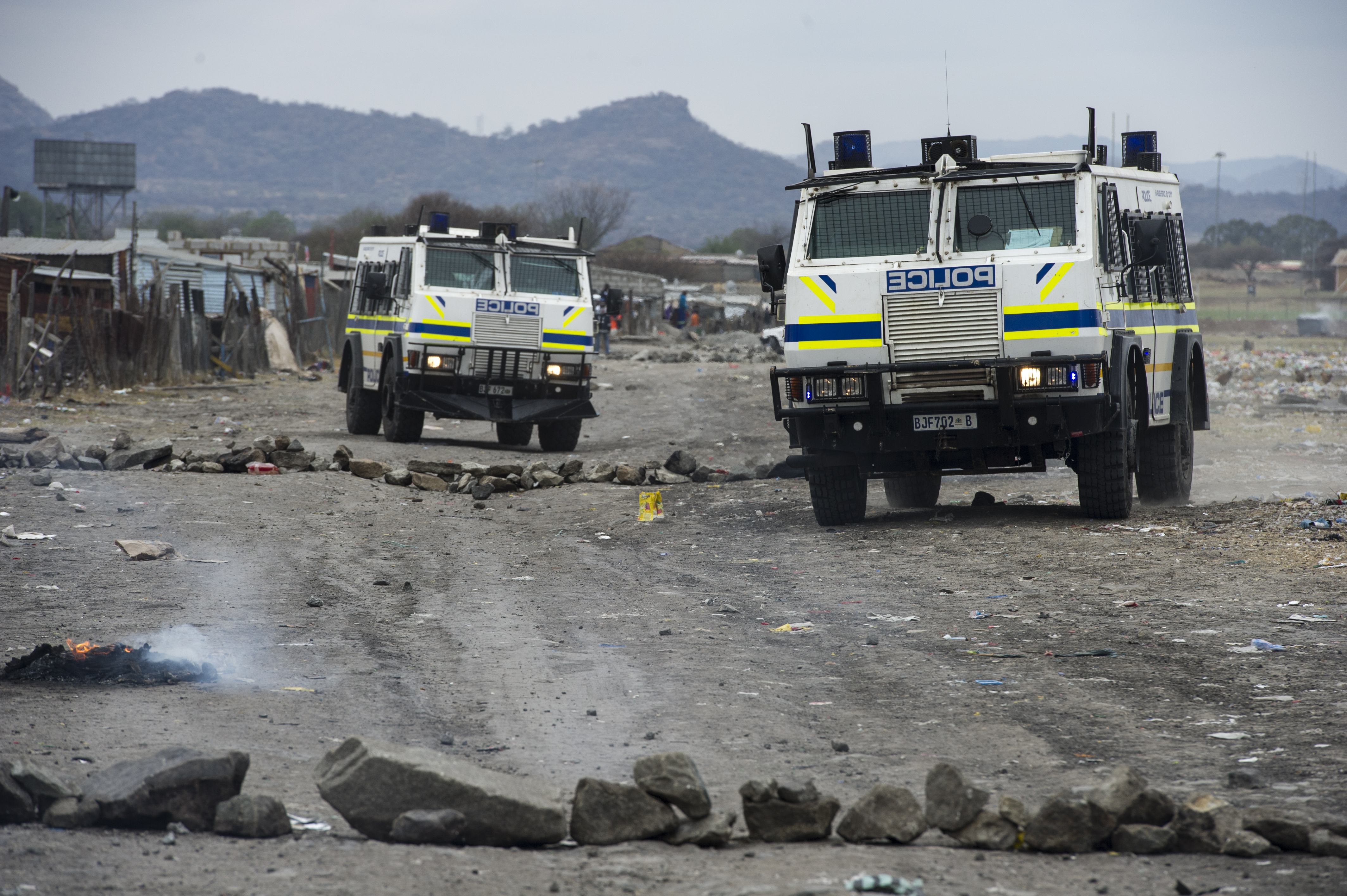 On 18 August 2020, SERI Executive Director Nomzamo Zondo participated in a webinar entitled "The massacre that didn't change policing". The webinar was hosted by the Institute for Security Studies (ISS) and the African Policing Civilian Oversight Forum (APCOF). Nomzamo Zondo was joined by Judge Ian Farlam who chaired the Farlam Commission of Inquiry, and Themba Masuku from APCOF chaired the discussion.  In her inputs, Zondo reflected on the experience of the families and the extent to which the Commission of Inquiry addressed their needs for truth and justice.

Zondo also discussed the lack of police reform since Marikana and how that has contributed to repeating patterns of police brutality especially in the contexts of protest action and evictions. She argued that police conduct during the national lockdown has evidenced that policing in South Africa is done through violence. She argued that the disproportionate use of force by police was a consequence of failing to learn from the Marikana massacre and failure to rein in police violence.

The panel discussed the significance of Expert panel report on public order policing and crowd management which was completed and submitted in 2018 but is yet to be made public by the Minister of Police. The panel was established in line with one of the recommendations from the Farlam Commission of Inquiry.