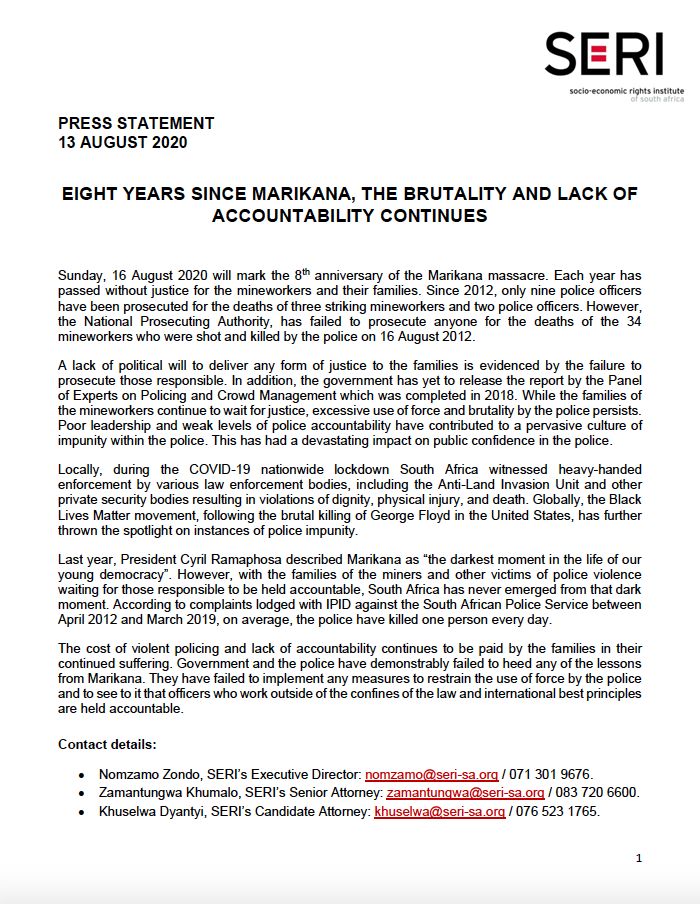 On Sunday, 16 August 2020, will mark the 8th anniversary of the Marikana massacre. Each year has passed without justice for the mineworkers and their families. Since 2012, only nine police officers have been prosecuted for the deaths of three striking mineworkers and two police officers. However, the National Prosecuting Authority, has failed to prosecute anyone for the deaths of the 34 mineworkers who were shot and killed by the police on 16 August 2012.

A lack of political will to deliver any form of justice to the families is evidenced by the failure to prosecute those responsible. In addition, the government has yet to release the report by the Panel of Experts on Policing and Crowd Management which was completed in 2018. While the families of the mineworkers continue to wait for justice, excessive use of force and brutality by the police persists. Poor leadership and weak levels of police accountability have contributed to a pervasive culture of impunity within the police. This has had a devastating impact on public confidence in the police.

Locally, during the COVID-19 nationwide lockdown South Africa witnessed heavy-handed enforcement by various law enforcement bodies, including the Anti-Land Invasion Unit and other private security bodies resulting in violations of dignity, physical injury, and death. Globally, the Black Lives Matter movement, following the brutal killing of George Floyd in the United States, has further thrown the spotlight on instances of police impunity.

Last year, President Cyril Ramaphosa described Marikana as “the darkest moment in the life of our young democracy”. However, with the families of the miners and other victims of police violence waiting for those responsible to be held accountable, South Africa has never emerged from that dark moment. According to complaints lodged with IPID against the South African Police Service between April 2012 and March 2019, on average, the police have killed one person every day.

The cost of violent policing and lack of accountability continues to be paid by the families in their continued suffering. Government and the police have demonstrably failed to heed any of the lessons from Marikana. They have failed to implement any measures to restrain the use of force by the police and to see to it that officers who work outside of the confines of the law and international best principles are held accountable.