SERI’s work in its ‘Expanding Political Space’ theme confronts the misuse of the criminal justice system to suppress community-based protests, the misuse of common law remedies to stifle protest and freedom of speech, and the misuse of force by the police in poor and vulnerable communities.

In response to the COVID-19 pandemic, President Ramaphosa announced that a nationwide lockdown would commence from 26 March 2020. The President also announced that the South African Police Service (SAPS) would be responsible for implementing and enforcing the lockdown regulations and directions with the support of the South African National Defence Force (SANDF). From the beginning of the lockdown, the police and military were reportedly heavy-handed in their enforcement with a harshness meted out against the poorest and most marginalised communities across the country.

The Institute for Security Studies (ISS) hosted a webinar on Lockdown abuse and civil society’s response on 21 April 2020. SERI researcher Thato Masiangoako, together with SAPS Major General Leon Rabie and Dr Ben Bradford from University College London, reflected on South Africa’s response to the lockdown and the abuses reported by members of the public.

In her presentation, Masiangoako discussed factors influencing the police and military abuses during lockdown: 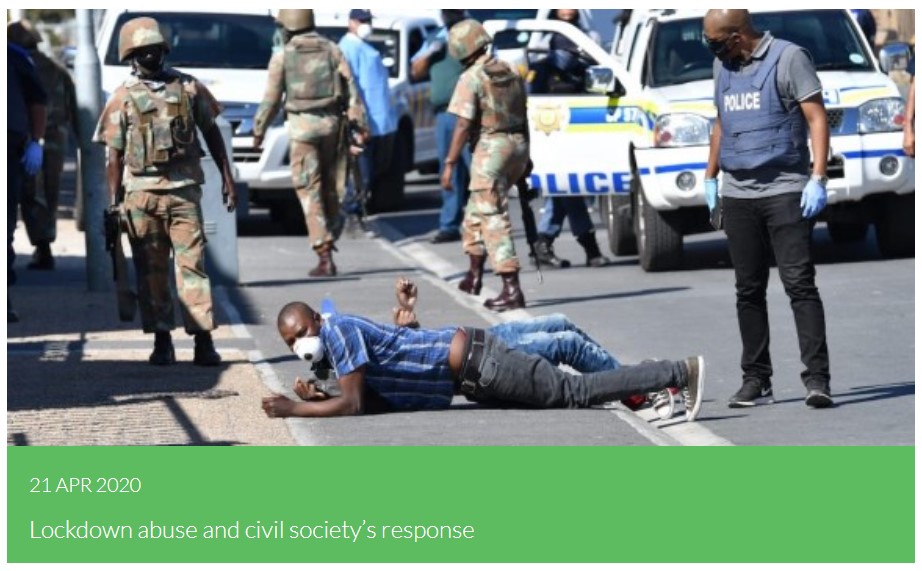 Lack of preparation: The lack of publicly available information, regulations, or guidelines explaining the reasons for deploying the police and the military, the boundaries of their mandate and their operating procedures, was a clear contributor. It was also not clear that security services were adequately trained and prepared on how to operate in a public health pandemic, including for example proper communication and de-escalation measures, and the practical measures they can take to protect themselves and members of the public from Covid-19 transmission.

In many of the incidents of abuse, victims knew the regulations and the limits of law enforcements’ powers better than law enforcement itself, and in at least one tragic incident, this cost them their lives. Many others have been left with injuries that have changed their lives forever.

Public health agenda v the securitised anti-crime agenda: The Minister of Police has regularly noted a decline in crime statistics and high numbers of arrests as indicators of police performance. These are at best spurious indicators and better measures of police performance could rather include the successful and nonviolent management of high-density incidents such as protest action, or food parcel, or social grant collections.

Systemic misuse of force and an endemic lack of accountability: South Africa has been unable and, in some cases, unwilling to hold the police accountable for unlawful conduct and incidents of excessive use of force. The Independent Police Investigative Directorate (IPID) has been poorly resourced, under-capacitated, insufficiently independent, and under embattled leadership for many years. This has eroded its ability to hold the police accountable, which has contributed to a culture of impunity. A lack of police accountability has also had a corrosive effect on public confidence.

Leadership messaging: Statements by the Minister of Police and Minister of Defence indicated that the security forces are required to discharge their duties within the confines of the law. They also made statements that could be interpreted as either suggesting that the misuse of power and force could, under particular circumstances, be justified or even warranted. Sentiments that warned the public against “provoking” and “proving a point” and even veiled threats of an escalation of force and the use of “mechanisms” to “nudge” and “push” people to comply, could be seen as sending tacit messages of approval of violence by SAPS and the SANDF. Leaders must clearly indicate that misconduct will not be tolerated under any circumstances and that the security forces are mandated to enforce the lockdown regulations within a humanitarian framework in which effective and clear communication and generating confidence is key to the kind of compliance on which such a lockdown depends.

We can’t police our way out of a pandemic webinar

SERI is a member of the Anti-repression Working Group C-19 People’s Coalition.  The working group has established itself to monitor the enforcement of the lockdown, to document human rights abuses, and to provide analysis that can be used for media and policy advocacy. In this capacity, Thato Masiangoako participated in a webinar entitled We can’t police our way out of the pandemic and reflected on SERI and the Coalition’s work in response to the heavy-handed lockdown enforcement and the abuses witnessed. The webinar was hosted on 23 May 2020. 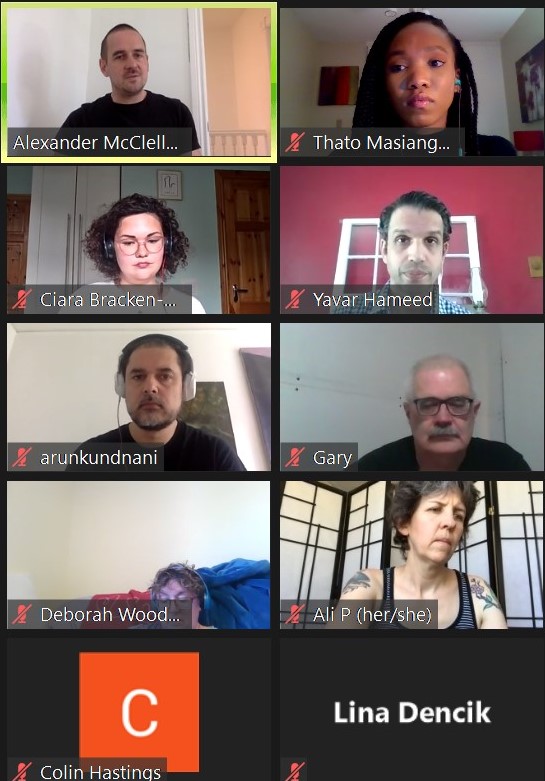 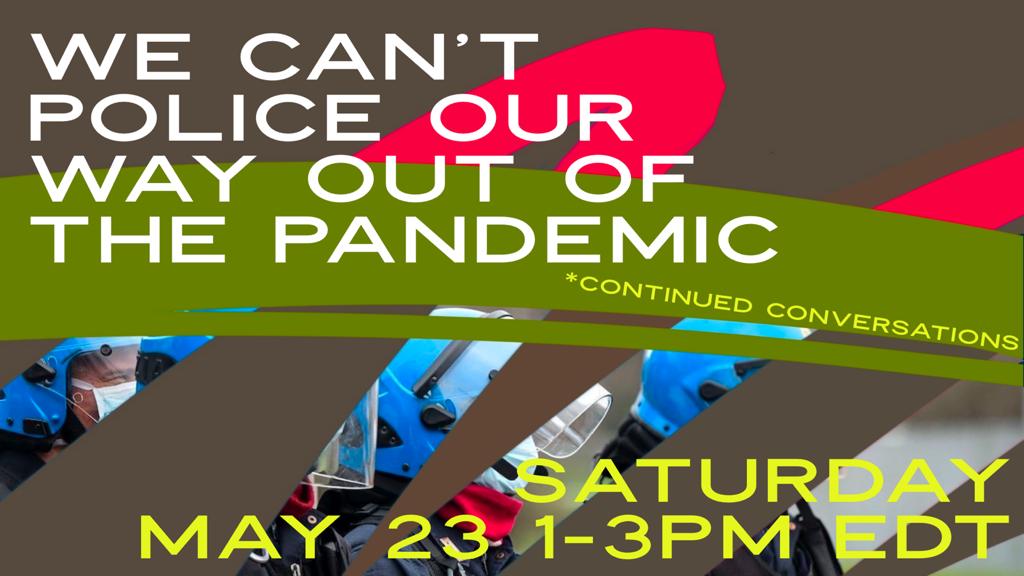 Masiangoako provided an overview of government’s response to the pandemic, highlighting how a public health pandemic had been managed in an overly militarised and securitised manner. She then discussed the nature of abuses reported and the role that members of the public and the media have played in documenting and publicising abuses by SAPS, SANDF, metro police and other law enforcement officials. Masiangoako discussed the Khosa matter and the significance of the judgment issued by the High Court. SERI intervened as Amicus in the Khosa matter in support of the Khosa family and in order to prevent further abuses against members of the public and to lay down just measures to hold the security services accountable during the lockdown.

The panel included activists, practitioners and academics from other countries, including Yavar Hameed (Ottawa-based human rights lawyer), Ciara Bracken-Roche (Assistant Professor of Criminology in the Department of Law at Maynooth University in Ireland), Stephen Molldrem (Interdisciplinary social scientist), Arun Kundnani (Author of The Muslims are Coming! Islamophobia, Extremism, and the Domestic War on Terror, 2014), and Lina Dencik (Reader in the School of Journalism, Media and Culture at Cardiff University, UK and Co-Founder of the Data Justice Lab).

People’s Assembly on the Khosa judgment

On 26 May 2020, the C-19 People’s Coalition hosted a People’s Assembly in an effort to unpack and discuss ways for civil society to fully leverage the Khosa judgment. The webinar entitled ‘The Khosa judgment: reining in state repression and looking ahead’ included a panel of speakers including SERI’s Thulani Nkosi, Franny Rabkin (Journalist at Mail & Guardian), Musa Gwebani (Activist), and Prof Pierre de Vos (Constitutionally Speaking). SERI’s Thato Masiangoako and Kelly Gillespie of the People’s Coalition co-facilitated the discussion. 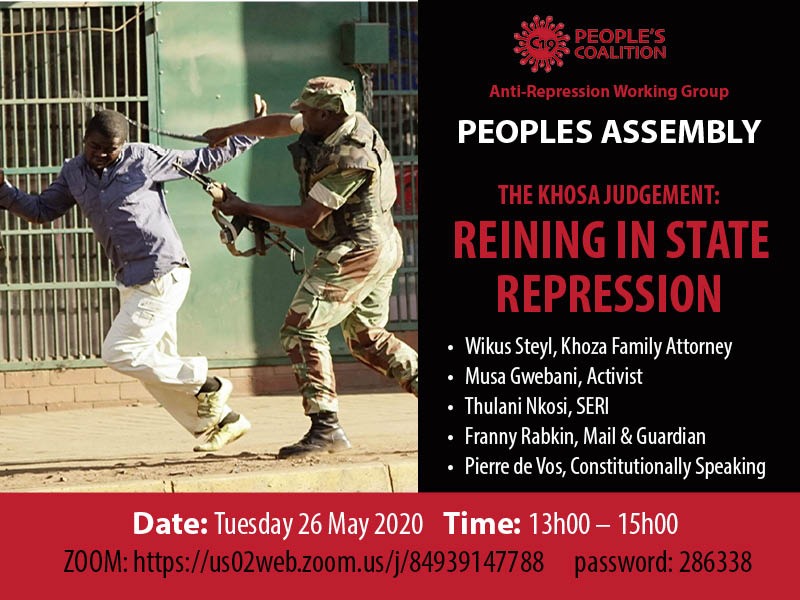 Thulani Nkosi opened the discussion by providing background to the case and overview of the relief that was sought by the family. Nkosi argued that what we saw after Mr Khosa’s death was a failure to take accountability for what happened and that all that leaders were prepared to say to the public was that the matter was under investigation and therefore, there was no sense of accountability. Amongst the relief sought by the Khosa family was a declarator that the constitutional rights of members of the public were not suspended by a declared national State of Disaster. In the judgment, Judge Hans Fabricius noted that at its core, the Khosa matter was about a breach in trust between the State and its citizens. As such, Nkosi highlighted that the judgment sought to restore that trust and that in order to do so “Government must be reminded that the people of South Africa still have their rights and the government is still obligated to respect and protect those rights”. 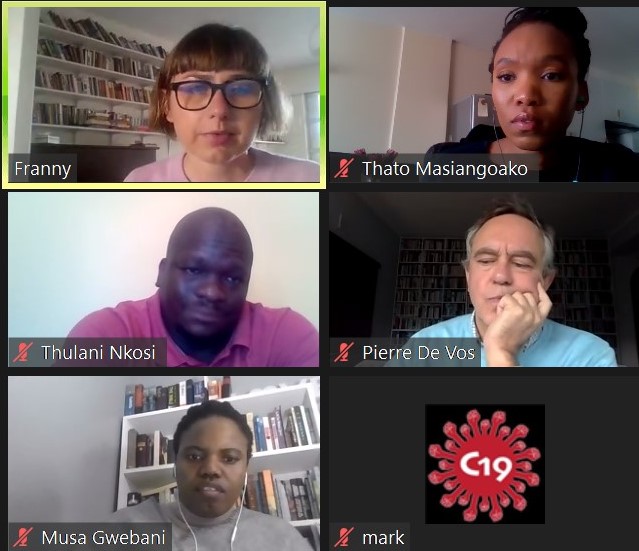 The Court also ordered the Minister of Defence and the Minister of Police to “develop a code of conduct, and they must develop the documents that show how this joint operation is going to work and who is responsible for what, and insofar as that investigation into Mr Khosa’s death in concerned, they must report back to Court and say that they have done the investigation and what the investigation found”. The code of conduct is to be developed in terms of Section 19(3)(c) of the Defence Act, 2002, in order to spell out the details of cooperation between the SANDF and SAPS in the context of a pandemic.  Nkosi argued that these are the reasons why the judgment should be hailed as a victory for everybody  because “prior to Mr Khosa’s death, everybody was witnessing on national television that law enforcement authorities were enforcing the lockdown regulation in a violent manner and that in many incidents people’s rights we being trampled on.”

On 26 May 2020, the SANDF Board of Inquiry submitted its report into the circumstances around Mr Khosa’s death to the High Court. The report exonerated the members of the SANDF by finding no connection between their actions and the injuries Mr Khosa sustained, leading to his death. Family victims and other witnesses reported that Mr Khosa had his hands held behind his back, was kicked, choked, slammed against a cement wall and steel gate and was hit with the butt of a machine gun, and yet the report disturbingly found that the only force used was ‘pushing and clapping’.