For a full list of op-eds written by SERI staff, see here.

For a full archive of all SERI's popular education work between 2010 and 2013 see here.

The documentary film Dear Mandela portrays the struggles of young activists from the Abahlali baseMjondolo (AbM)  movement, who have resisted mass evictions in the face of violence and intimidation since 2005.

In 2015 SERI and the Dear Mandela filmmakers, Dara Kell and Chris Nizza from Sleeping Giant Films, launched an audience engagement project, which included a national screening tour and a series of community workshops throughout the country. The project was generously funded by The Ford Foundation. Read more about the project and the screenings here. 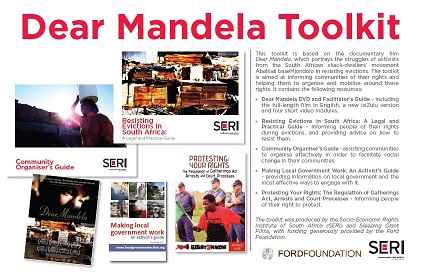 SERI and Dear Mandela have also developed a toolkit aimed at informing communities of their rights and helping them to organise and mobilise around these rights.

The toolkit contains the following resources:

The toolkit will be distributed to community leaders and members during the film screenings and community workshops.